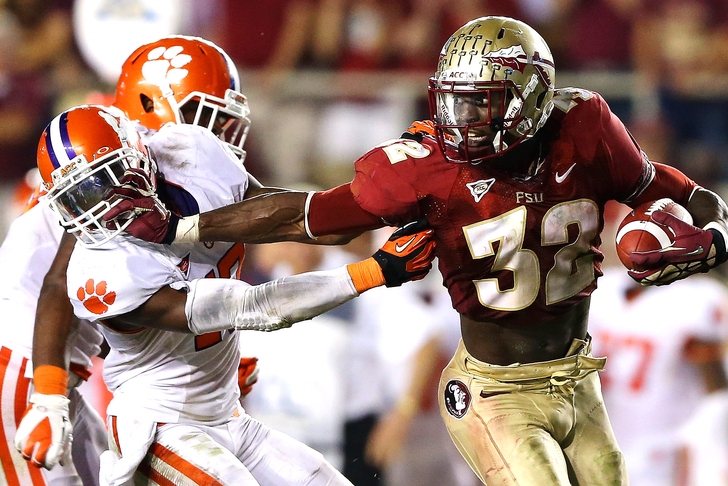 The #22 Clemson Tigers completely shut down the #1 Florida State Seminoles' offense in the first half, as they forced seven punts on eight drives to head into the break up 10-3.

The Seminoles would turn it around in the second half, riding a wave of big plays and a huge overtime finish to outlast the Tigers 23-17.

Here's what we learned from this extra-time thriller.

5. Jameis Winston Is An Essential Part Of Florida State's Attack

Without the reigning Heisman Trophy winner on the field, Florida State's attack was spotty at best in the first three-and-a-half quarters. Despite Clemson doing their best to give away opportunities with stalled drives in Seminoles territory, FSU couldn't take advantage for the majority of the game.

Winston's athleticism and on-field leadership makes every single one of his weapons better, and it shows even more when he's off the field. As long as he can skirt his off-the-field problems for the remainder of 2014, they won't have to deal with him standing and watching for much longer.

Clemson's run defense was so dominant on Saturday that FSU was forced to put added pressure on Sean Maguire by dropping him back for the majority of the second half. Neither Mario Pender or Karlos Williams could get anything going, combining for 35 yards on their first 16 carries.

By stacking the box and forcing Maguire to try and create something out of nothing, Clemson's front seven should all be given a pat on the back for their work on Saturday night.

3. Sean Maguire Is The Future Of The Seminoles

With everything going against him and his offensive line seemingly in tatters, Sean Maguire made not just a play, but a PLAY, as he rolled out to the right and hit a wide-open Rashad Green for a 74-yard TD pass that changed the complexion of the game entirely at 17-17.

Sure the young kid made mistakes (a late interception by Jadar Johnson almost sealed a Clemson upset in regulation), but he remained poised when other lesser quarterbacks would have fallen apart.

It's Winston's team now. But, the future is bright.

2. The ACC Atlantic Division (And Maybe The ACC) Could Stop Here

Florida State and Clemson have been the class of the ACC's Atlantic Division for the past half-decade, along with combining to win the last three conference titles. This overtime classic only further cements the stock both programs put into this game - a rivalry that is becoming one of the better ones in college football.

A 4th-and-1 on the first possession of overtime proved Clemson's undoing, as coach Dabo Swinney dialed up an Adam Choice run that went nowhere.