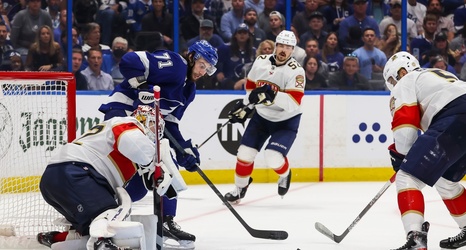 TAMPA, Fla. (AP) — Andrei Vasilevskiy had 49 saves and the Tampa Bay Lightning completed a four-game sweep of the Florida Panthers with a 2-0 victory Monday night that sent the two-time defending Stanley Cup champions back to the Eastern Conference final for the sixth time in eight years.

Pat Maroon snapped a scoreless tie, batting Zach Bogosian’s shot down behind Panthers goaltender Sergei Bobrovsky before the puck trickled into the net a little over six minutes into the third period. Ondrej Palat added an empty-net goal with 22 seconds left.

Vasilevskiy won his sixth straight game, a streak that began with the Lightning facing a 3-2 series deficit in the opening round.