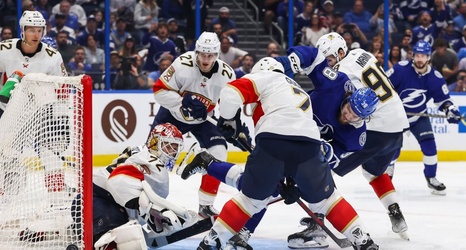 TAMPA, Fla. (AP) — Steven Stamkos scored two goals and Nikita Kucherov had a goal and three assists and the Tampa Bay Lightning beat the Florida Panthers 5-1 to move to the brink of another trip to the Eastern Conference final on Sunday.

Corey Perry and Erik Cernak also scored, and reigning Conn Smythe Trophy winner Andrei Vasilevskiy had 34 saves to help the two-time defending Stanley Cup champions take a commanding 3-0 series lead over the Panthers, who had the NHL’s best record during the regular season.

Game 4 is Monday night at Amalie Arena, where the Lightning have won three of four games this postseason.