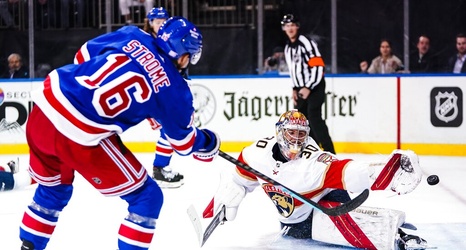 NEW YORK (AP) — Igor Shesterkin made a season-high 42 saves and the New York Rangers held off Florida 4-3 on Monday night, handing the Panthers their first loss in regulation this season.

Chris Kreider and Adam Fox each had a goal in the first period before K’Andre Miller and Ryan Strome scored 30 seconds apart in the second as New York built a 4-0 lead after two.

Eetu Luostarinen scored 20 seconds into the third for Florida (10-1-1), poking in the puck for his fourth goal of the season. Sam Reinhart made it 4-2 at 18:34 with this third before Patric Hornqvist scored at 19:20 to make it a one-goal game.