No. 41 FIU Women’s Tennis Battles No. 35 Florida State to the Brink in NCAA Opening Round 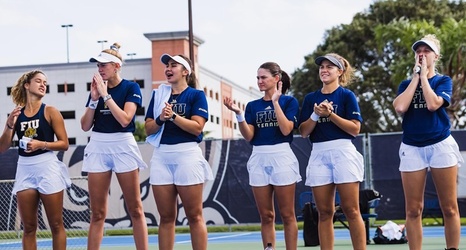 GAINESVILLE, Fla. - The No. 41 ranked FIU women's tennis team gave No. 35 Florida State all it could handle in a 4-2 loss in the opening round of the 2022 NCAA Tournament on Saturday afternoon on the campus of the University of Florida in Gainesville.

The match saw four of the six matches pushed to a third set and each of the three doubles clashes were decided by two points or less.

The Panthers, who were making their second consecutive appearance in the NCAA Tournament and 11th in program history, fell behind in doubles play after freshman Yasmine Kabbaj and Ines Bekrar were defeated 6-4 in the No.