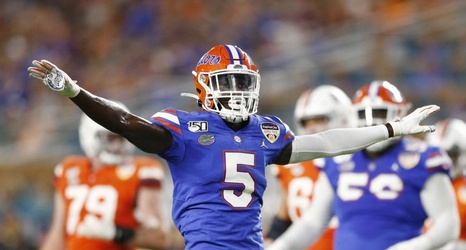 MIAMI, FLORIDA - DECEMBER 30: Kaiir Elam #5 of the Florida Gators celebrates after breaking up a pass against the Virginia Cavaliers during the first half of the Capital One Orange Bowl at Hard Rock Stadium on December 30, 2019 in Miami, Florida. (Photo by Michael Reaves/Getty Images)

One day after listing five Florida Gators that could be drafted early in the 2022 NFL Draft, ESPN’s Todd McShay dropped a 2022 Mock Draft with a Gator going in the top 10. That Gator was our No. 1 player on our list, cornerback Kaiir Elam

McShay had Elam going No.