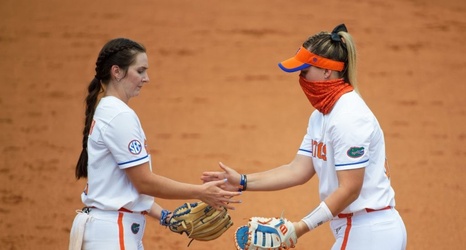 A special report from the UAA on the Florida Gators softball team:

WHAT HAPPENED: Junior Elizabeth Hightower threw her first career no-hitter Saturday and got a couple big RBI from catcher Julia Cottrill, including a solo homer in the sixth, as the fourth-seeded Gators completed a three-game sweep of their NCAA Tournament home regional with a win Sunday over the Bulls at Pressly Stadium.

Hightower outdueled USF’s All-America ace Georgina Corrick, who threw all four regional games for the Bulls, including a no-hitter against Baylor on Saturday. Corrick came into the game having yielded just one run over three games, that being the walk-off RBI double by UF’s Hannah Adams in Friday night’s first-round meeting.