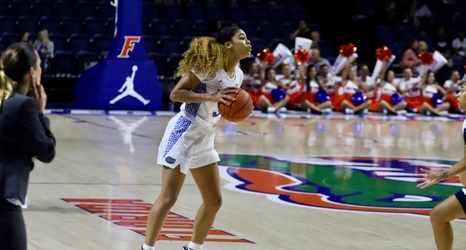 Coach Cam Newbauer reached a personal milestone Sunday afternoon, but he didn’t know it until after Florida’s women’s basketball team defeated Longwood 71-54 at the O’Connell Center.

Newbauer racked up 79 victories at Belmont before coming to Gainesville, and this result earned him his 100th-career win at the collegiate level.

“No, I was not aware of that until Sam (Stolte, the sports information director) said it,” the third-year UF coach said. “I had to double-check because I wasn’t sure if that was right.”

The Gators (2-0) were careless with the ball to start the game, turning it over on each of their first three possessions.