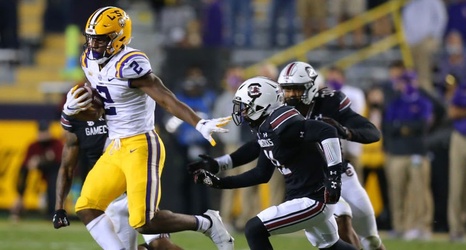 BATON ROUGE, LOUISIANA - OCTOBER 24: Arik Gilbert #2 of the LSU Tigers runs with the ball as Shilo Sanders #21 of the South Carolina Gamecocks defends during the second half of a game at Tiger Stadium on October 24, 2020 in Baton Rouge, Louisiana. (Photo by Jonathan Bachman/Getty Images)

What a wild 24 hours it has been here at Hail Florida Hail. After publishing an article yesterday about how LSU transfer and former 5-star tight end Arik Gilbert was poised to be a star for the Florida Gators, Gilbert announced on Twitter that he was decommitting and re-entering the transfer portal.