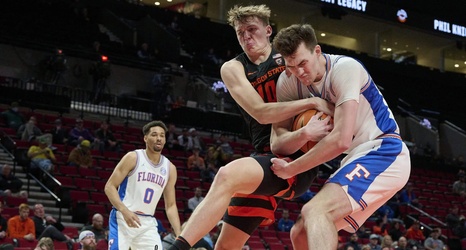 Florida’s Thursday loss to Xavier in the Phil Knight Legacy was a game punctuated by a handful of puncturing Musketeers runs.

On Friday, Florida responded to that loss with an early run that put Oregon State on its back foot — and fended off the Beavers’ attempts to make runs back into contention — in an 81-68 win.

Trey Bonham was once again Florida’s spark, scoring 19 points with the aid of three threes and dishing three assists; his emergence as Florida’s leading scorer in Portland, after a relatively anonymous first few games and a game-swinging stint off the bench at Florida State, is probably the biggest development of the tournament for the Gators.