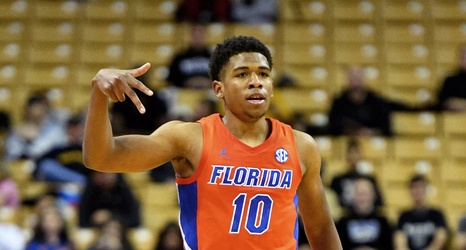 The Florida Gators went to College Station on Wednesday night hoping to get the bad taste of a dismal loss at Ole Miss out of their mouths.

Feeding Noah Locke left a sweeter aftertaste, it turned out.

Locke stroked five threes and scored a season-high 21 points, pacing the Gators until their defense clamped down on the Aggies for a 78-61 victory.

Four of Locke’s threes came before halftime, as he benefited from great ball movement to snipe away from all around the arc and score 14 points in the first period. And while two of his fellow sophomores would put together even better lines in the box score — Andrew Nembhard led all scorers with 24 points, getting them on both drives and triples, and Keyontae Johnson had 10 points, 10 rebounds, and six assists — it was Locke who handled the load in the first half, while surprisingly good shooting from A&M kept the Aggies within six points throughout the period and down just three at half.