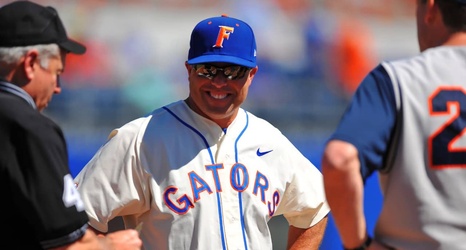 While the Gators’ offensive explosion stole the show in Wednesday’s beatdown of Mississippi State, Thursday evening’s winners’ bracket showdown with Alabama was all about the man on the mound for the Gators.

Franco Aleman was sensational. He pitched a career-high seven innings and gave up no runs on five hits. He walked only one batter and struck out four.

His dominant start, along with some late offense, propelled sixth-seeded UF past the 10th-seeded Crimson Tide 7-2 and into the SEC Tournament semifinals on Saturday. They’ll face the winner of Friday’s elimination game between Alabama and second-seeded Tennessee in a single elimination game.