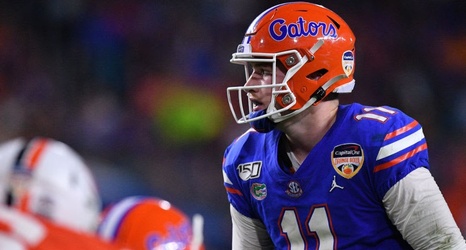 MIAMI, FLORIDA - DECEMBER 30: Kyle Trask #11 of the Florida Gators under center during the first half of the Capital One Orange Bowl against the Virginia Cavaliers at Hard Rock Stadium on December 30, 2019 in Miami, Florida. (Photo by Mark Brown/Getty Images)

Former Florida Gators quarterback Kyle Trask has had an interesting draft season. Trask has gone from a potential first-round pick to a potential late day 2 player. A big part of that was the last collegiate game he played in, which was a blowout loss to Oklahoma in the Cotton Bowl.