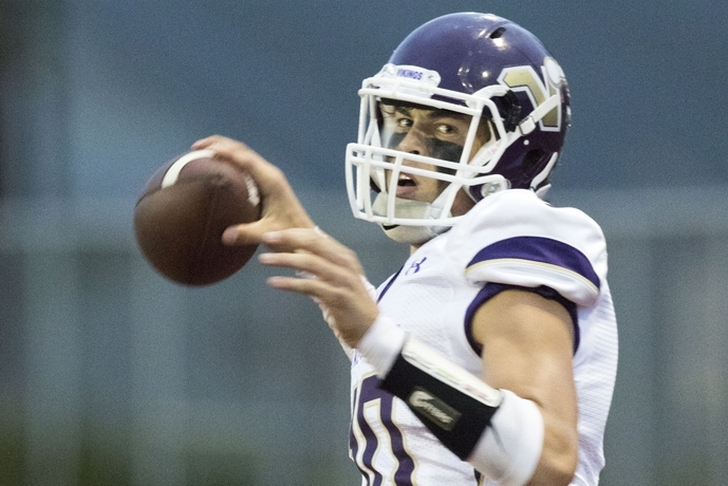 Jacob Eason will stay with Georgia. He re-opened his commitment process and checked out several other schools, but ultimately elected to stay with the Bulldogs.

Jacob Eason is one of the most highly-sought after recruits in the country, despite being committed since July 2014. Eason is a 5-star QB recruit who has been pledged to the Georgia Bulldogs, but re-opened his recruitment after Mark Richt was canned by Georgia. Eason is now down to flipping to the Florida Gators and staying with the Bulldogs.

Eason spoke with The Herald, a paper based out of Everett, Washington. Eason hails from Lake Stevens, Washington, which is just 30 minutes outside of Everett.

"I’m still committed (to Georgia) but I’m going to have to decide between the two," Eason told The Herald. "The positives and negatives and all that stuff. Over this year, with coach Richt getting fired and all that stuff, (Florida) kind of popped up. The coaches have been wanting me to come down for awhile so I came down and I liked it a lot. It’s a great school and a great opportunity there too. It’s going to come down, ultimately, to what I decide and where I feel comfortable."

Eason will take his second official visit to Georgia this weekend. As Chat Sports reported in early November, Eason had begun to form a backup plan in case Richt was dismissed. Eason has already spoken with new Georgia head coach Kirby Smart.

He took an official visit last week to Florida. After that visit, there was a report that he told Gator players he planned on flipping to Florida.

"I knew Florida was a pretty good option because Coach Nuss and Coach Mac both are from around here," Eason said. "So I set up a trip there to go check that out and ended up really liking it. There’s a lot of good things. Coach Nuss coached at U-Dub and Coach Mac graduated from Eastern Washington and they’ve both got good track records. There’s a lot of good things I got out of that trip."

Eason signed a financial aid agreement, which allows unlimited contact between Georgia coaches and Eason. Eason can get out of the agreement, but it could result in sanctions against Georgia if Eason signs elsewhere. Eason hasn't put a timetable on his decision, but it will likely come in the near future.