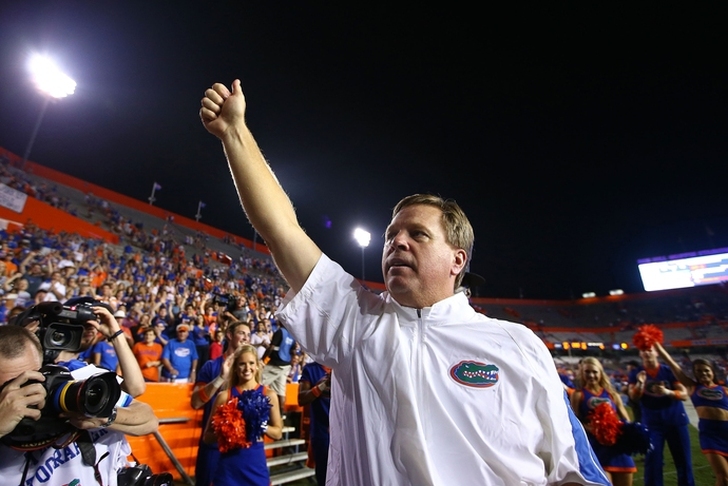 The Florida Gators are in the process of putting together the first true recruiting class under Jim McElwain. The Gators already have several players committed, but they aren't done yet. They're making a strong push during the last month of recruiting as we heads towards National Signing Day on Wednesday, Feb. 3. Here's all the latest news and rumors you need to know for Florida football recruiting.

Gators Pushing For Four-Star OG
John Simpson, a four-star offensive guard, made his official visit to Florida over the weekend. While Clemson has been the front-runner for Simpson, the Gators are very much in the mix. He's the 10th best guard in the nation, but he's also visiting Clemson this coming weekend.

UF Visiting Five-Star CB
McElwain will visit with five-star CB Kristian Fulton Monday, reports 247Sports. Fulton is the No. 3 CB in the 2016 class and the No. 24 overall player. LSU is currently the favorite, but Fulton will visit the Gators on Jan. 29th. The Gators have a chance to land the stud corner.

Four-Star LB Talks UF Visit
Dontavious Jackson is a four-star MLB who took a visit to Florida this weekend. He spoke with 247Sports about the trip.

"It was great," Jackson said. "Learned a lot about the depth and the scheme and I think I could make a big impact there early."

Jackson is the No. 5 MLB in the nation and the No. 122 recruit. While the Gators are in the mix, the Texas Longhorns are currently the favorite to land the Houston recruit.

Where Florida's Class Sits
The Gators already have 26 committed recruits, meaning they pretty much have a full class. They currently ranks No. 6 in rivals.com's rankings, behind only Notre Dame, Michigan, Ole Miss, LSU and Ohio State. Three players have already signed their letter of intents. The star of the class is five-star DE Antonneous Clayton.