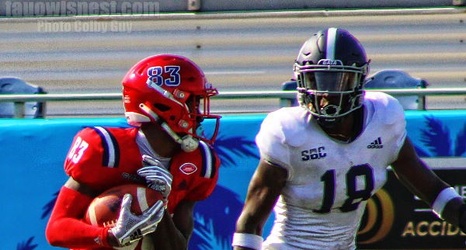 Despite a shaky start, Florida Atlantic dismantled Georgia Southern 38-6 in the first FAU home game since the passing of Owls' Coach Howard Schnellenberger.

The Eagles opened the scoring with a methodical 95-yard drive typical to an option-based team. Misdirection runs and multiple third down conversions looked to spell doom for an FAU defense that could not get off the field. It was not until a Jordan Helm fumble recovery midway through the second did the Owls look threatening.

FAU's N'Kosi Perry threw for 332 yards and four touchdowns, all without a single turnover. He found John Mitchell twice for the converted tight end's first score since 2019, as well as LaJohntay Wester for a controversial touchdown.