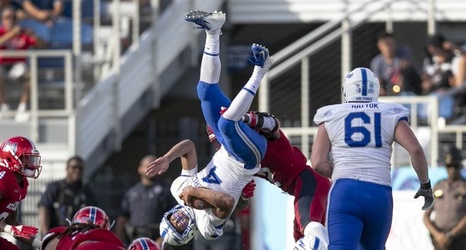 BOCA RATON — One of the worst things a student wants to hear after a bad report card is how the parents aren’t mad, but disappointed. The same philosophy extends to the grades Florida Atlantic’s defense and special teams group are receiving midway through the 2018 season.

A defense which returned 10 of 11 starters, including three All-Conference USA Preseason Selections, was not supposed to be this inconsistent. Struggles were expected on special teams after kicker Greg Joseph and punter Ryan Rickel each exhausted their final years of eligibility, but not to the point where Owls head coach Lane Kiffin opted to use starting quarterback Chris Robison as a punter.