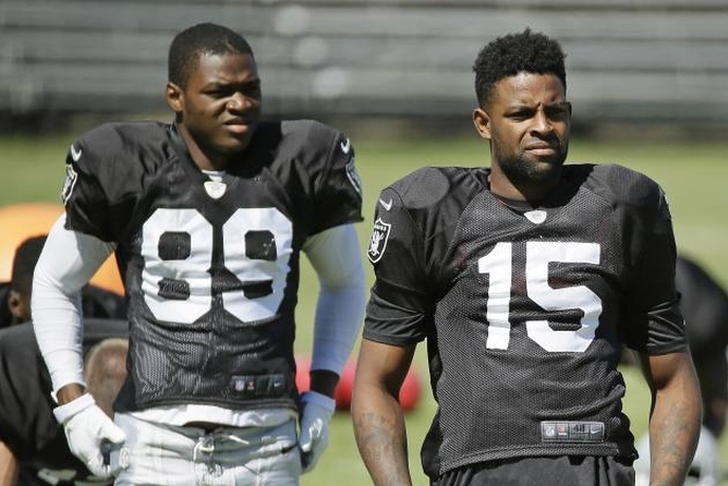 The excitement in the air is evident as fantasy football playoffs are around the corner. So, stay away from the patented 4th quarter “Eli Manning and Tony Romo” choke and don’t mess up your lineup.

*TNF game is not being included!!

With Vincent Jackson to miss another week, Evans will hog the targets yet again. Atlanta’s double team coverage was stifling but expect Evans to rebound against the Giants porous secondary.

Coming off two straight good weeks, Cooks will keep rolling against Tennessee. It looks like the Saints have finally learned how to utilize their speedster and the Tennessee secondary has struggled the past few weeks against opposing WR’s. Expect WR1 numbers from Cooks this week.

Regardless of who is playing QB for the Jets on Sunday, Decker will benefit from a gimpy Brandon Marshall and be on the receiving end of 10+ targets. Expect a rebound game from the Jets this week and another big game from Decker.

Nobody is a bigger fan of Carr-mania than me. The Oakland receiving corps will be needed desperately in a must-win game for the Raiders, especially against a Steelers’ secondary that got lit up by AJ Green last week.

Which WR not named Antonio Gates will step up for the dynamic, but hobbled, Keenan Allen? If you don’t know, then I’ll give you a hint: Stevie Johnson!  Stevie’s been Rivers’ undisputed 3rd option behind Allen and Gates and should fill in nicely in Monday Night’s unwatchable prime time game against Chicago.

Sleeper Pick of the Week:

Anyone remember this guy? Remember he had that one career week in 1988 (at least it feels like that long ago)? Well, that was against Buffalo and in a must win game for the Dolphins against their division rival, Matthews will recapture his magic. FYI, Matthews is second behind Jarvis Landry among Miami WR’s in snaps with 377. He is an underrated play for most weeks.

He’s banged up and going against the best secondary in football. And…I forgot to mention that his quarterback is injured and his offensive coordinator was fired on Tuesday. Don’t play him.

Until he starts catching balls he isn’t a worthy starter and while the the Cowboys have struggled it has been through no fault of their secondary. Strong sit on Matthews.

Even if Anquan Boldin does play, I can’t recommend starting anyone from the 49ers receiving corps. Blaine Gabbert under center means bad things for this offense, maybe even Kaepernick-level bad.  However, if you are looking for a defense, Atlanta’s happens to be a favorite of mine this week.

It looks like Jackson will be back on the turf this week for the first time since the opener. In theory, starting Jackson in a game in which Washington will be playing from behind the Patriots makes sense. However, balky hamstrings heal slowly and it may take Jackson some time to get back to full game-speed. Keep D-Jax on the bench for one more week and reevaluate next week.

With Davante Adams’ return, Jones is back as the #3 WR and plays a tough Carolina team. I don’t expect that Rodgers and gang will lay a second straight offensive egg but its possible that Jones will. Stash him on the bench this week.