Fantasy Football Waiver Wire: 5 Players To Pick Up In Week 5 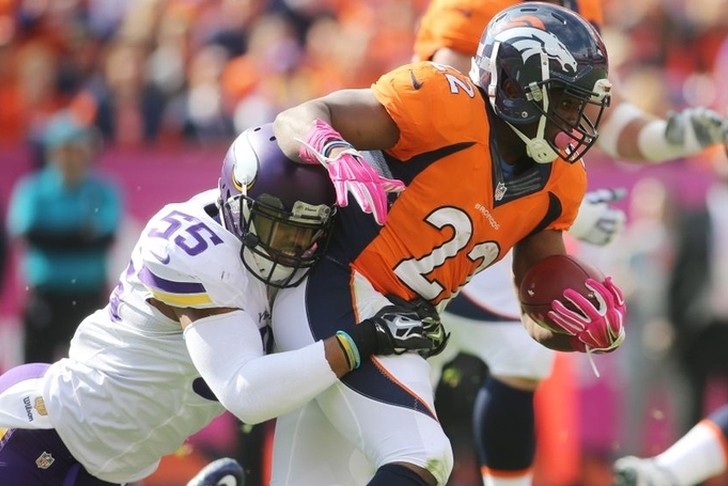 The fourth week of the fantasy football season is in the books. Whether you are 4-0, 0-4 or somewhere in between, you might be itching to make some waiver wire moves to improve your team. With bye weeks here, making a few moves might be necessary. If you’re looking to add some depth, there are a few players owned in less than 50 percent of leagues worth picking up. Here are five fantasy football players you should consider signing.

So this was not something I expected. Hillman was on this list early in the year, but users wisely picked up him. He's been cut in enough leagues that he's owned in less than 50 percent, which astounds me. Go pick him up right now. There is a chance he's going to get the bulk of the carries in Denver, and he's at least worth having on your bench.

Hankerson made this list last week and he's likely going to continue to make an appearance until he's owned in enough leagues. Roddy White has the name value, but it's Hankerson who is the clear No. 2 WR in Atlanta. Since Week 1, Hankerson has 24 targets and White has five. I'm fine with cutting White to make room for Hankerson.

Hurns is boom-or-bust, but he's on this list because he had a whopping 15 targets against the Colts. Even in those monster games Hurns had last year, he didn't have that many. Hurns might not get as many targets the rest of the season, but he's worth adding and seeing if Blake Bortles continues to look his way.

I like Austin and he's dynamic with the ball in his hands. The Rams finally made sure to get him the ball against the Cardinals and it paid dividends. Hopefully the Rams continue to get him the ball, but I do have my doubts about that. At the least, he's worth keeping on your bench.

I liked Johnson entering the NFL Draft and I still like him now. He put up impressive numbers last week, recording 17 fantasy points. Most of that damage came through the air, which is why Johnson is a must-add in PPR formats. However in standard leagues, his value is limited. The Browns don't give Johnson enough carries, and the team as a whole has had issues running the football. He's worth adding a depth piece, but don't expect him to suddenly take all the carries away from Isaiah Crowell.