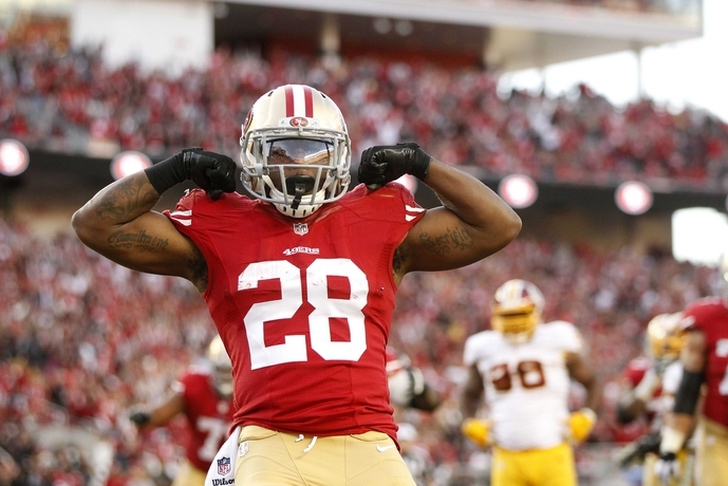 The second week of fantasy football is in full swing. The waiver wire has already opened and you're likely trying to figure out your lineup before the Thursday night game. If you're having some issues, we're here to help. You won't see your studs on this start 'em or sit 'em list. Of course you're going to start Adrian Peterson, Julio Jones and Aaron Rodgers. You don't need me to tell you that. You're also not going to see a backup on this list; you already know to not play Knile Davis. This list is designed for the fringe players. If you're unsure which of your options you should go with, this list can help. The sleeper section is designed for those in deep leagues, or if you're really desperate. Here are your start 'em, sit 'em and sleepers for Week 2.

Palmers played well last week and has another good matchup against the Bears. He might not match his 307-yard, 3-TD performance from Week 1, but he's a smart play this week if you're in need of a QB. He's a Top 10 play this week.

Ryan was slightly above-average in Week 1, but should be better this week. He goes up against the Giants, who had issues stopping the Cowboys' passing attack (aside from a few lucky turnovers). With Julio Jones playing so well, Ryan is a Top 10 play this week.

Martin didn't put up massive numbers in Week 1, but Tampa Bay was forced to abandon the run early. Against a poor Saints' defense, Martin has the potential to put up big numbers. If you own Martin, try to find a starting spot for him.

Hyde had an impressive Week 1 performance against the Vikings and should put up big numbers against the Steelers. While the Steelers have had great defenses in the past, the unit this year isn't as good. Play Hyde with confidence this week.

Don't be scared by Forsett's poor week against the Broncos; Denver has one of the best defenses in the NFL. Forsett now gets the Raiders, who struggled stopping the Bengals' Jeremy Hill. Forsett is an RB1 this week.

Michael Floyd isn't 100 percent right now and Larry Fitzgerald isn't the fantasy player he once was. That leaves Brown, who played well in Week 1. Much like his QB Palmer, Brown has a great matchup this week.

Watkins laid an egg in Week 1, but he'll bounce back. The Patriots secondary is poor and the Watkins might be able to get open, something he struggled with last week when against Vontae Davis.

The loss of Dez Bryant hurts his owners, but it's a huge boost for Williams. He's now a WR2 play this week and could help fill the void of losing Dez. He needs to work on his drops, but the Eagles' secondary had issues in Week 1. Williams isn't anywhere near as good as Julio Jones, but Williams is worth starting.

Eifert played great against the Raiders, scoring twice. Although the Chargers are a bit better, Eric Ebron did play well against them. Ride Eifert while he's hot.

I had Manning pegged as a potential bust this preseason, and he looked bad in Week 1. At this point, don't play Manning until he proves himself or has a great matchup. His matchup against the Chiefs isn't good enough, as the Chiefs shut down the Texans in Week 1. I simply don't trust Peyton this week.

This really isn't Newton's fault. His offensive line is awful and the Panthers don't have many weapons outside of Greg Olsen. He's going up against the Houston Texans, and J.J. Watt could wreak havoc all afternoon. The running potential is always intriguing, but hopefully you have a safer option than Newton this week.

I know, I know. There is a good chance you don't have any other options except to start Anderson. If that's the case, play Anderson. But if you have running back depth, try to sit him. I don't have high expectations for him against the Chiefs and he's also nursing a toe injury. Ronnie Hillman is also threating to cut into his carries.

Unlike Anderson, you (hopefully) didn't draft Yeldon with the expectation of having to start him every week. He struggled in Week 1 against the Panthers and has another tough matchup against the Jets. Leave Yeldon on your bench this week.

The Colts struggled running the ball against the Bills, and they have another tough matchup against the Jets. If you have other options this week, sit Gore.

I'm still high on Cooper this season; he just has a bad matchup this week. Jimmy Smith is a great CB and Cooper could have issues with him. Plus, Derek Carr is recovering from a hand injury and might not be 100 percent. Sit Cooper if you can this week.

If you're think Johnson could get more targets with T.Y. Hilton possibly out with an injury, think again. If Hilton is out, Johnson will likely be covered by Darrelle Revis. That's a bad matchup and Johnson isn't worth starting.

Wright had a big first week, but has a tough matchup in Week 2 against Joe Haden. Mariota and the Titans' coaching staff could look to avoid targeting Haden.

Walker will be a Top 10 TE for much of this season, but not this week. The Browns aren't an ideal matchup and I'm concerned about Walker's hand injury. Don't play him if you have other options this week.

If you're really, really desperate, pick up Taylor and not Marcus Mariota. There's a chance the Buccaneers' defense is just really bad. Plus, Mariota's matchup against the Browns isn't ideal for fantasy purposes. Taylor, however, gets a Patriots defense that struggled stopping the pass against the Steelers. Taylor could put up solid numbers for you if you're in need of a QB this week.

With Andre Ellington out for 1-3 weeks, Johnson is worth taking a chance on. He's not going to be the long-term answer, and likely isn't worth owning once Ellington returns, but he could be a Band-Aid for your team if you're desperate.

If Hilton is out, or even just limited, Moncrief is a nice sleeper play. He's talented and could benefit from Johnson drawing Revis. If you're in need of a WR, Moncrief could be a solid desperation play.

With DeSean Jackson out, Reed should see more targets from Kirk Cousins. He's still not an ideal fantasy play, but could get you a few points if you're desperate. Side note: Austin Seferian-Jenkins no longer qualifies as a sleeper after last week.