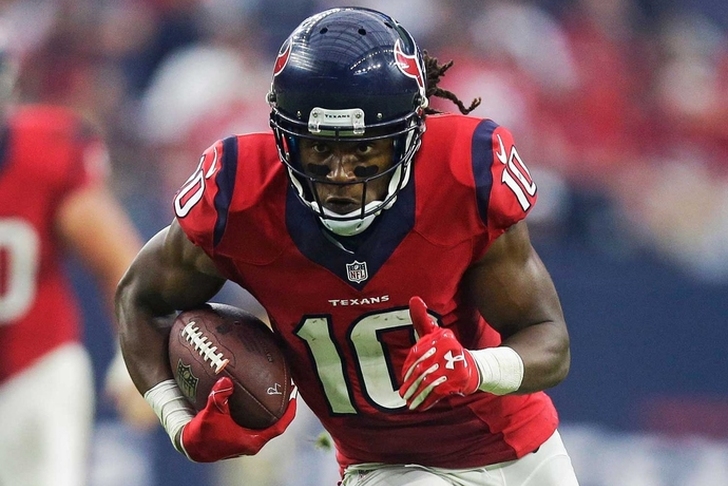 The third week of fantasy football is in full swing. The waiver wire has already opened and you're likely trying to figure out your lineup before the Thursday night game. If you're having some issues, we're here to help. You won't see your studs on this start 'em or sit 'em list. Of course you're going to start Julio Jones and Aaron Rodgers. You don't need me to tell you that. You're also not going to see a backup on this list; you already know to not play Knile Davis. This list is designed for the fringe players. If you're unsure which of your options you should go with, this list can help. The sleeper section is designed for those in deep leagues, or if you're desperate. Here are your start 'em, sit 'em and sleepers for Week 3.

Palmer made this list last week, and he makes another appearance. He continues his run of great matchups, this time going up against San Francisco 49ers. Palmer has been hot this season and he's a smart QB play this week.

Newton is coming off a strong week against the Houston Texans, something I didn't see coming. He's got a great matchup this week against the New Orleans Saints. Newton's running ability boosts his value and he could put up big numbers against the Saints.

Murray hasn't had the best of matchups so far, but he's got a great one this week. The Browns still have issues stopping the run and Murray could have a big game. He's a Top 10 play at RB this week.

With Tevin Coleman likely out for a few weeks, Freeman is the Falcons' feature back. He should get almost all of the work this week and could put up good numbers against the Cowboys.

For now, it appears that Lewis is the feature back in New England. He's getting the bulk of the carries and the goal line work. There is always the risk LeGarrette Blount could get more touches in the future, but for now, Lewis is worth starting.

Robinson had a huge performance last week and could have another big one. He's got a great matchup against the Patriots, who have had issues stopping the pass this season.

If Hopkins keeps playing this well, he could become an obvious start each week. He's the Texans' top target by far and teams still can't stop him. That shouldn't change against the Buccaneers this week.

With Hopkins fighting a concussion, he's not really a clear start. Start him if he's active, but if he is out, consider Brandon Marshall, WR, Jets his replacement on this list.

Landry is Ryan Tannehill's favorite target, as shown by his back-to-back 10-point games. The Bills have had issues stopping wide receivers and Landry should see plenty of targets this week. He's a safe WR2.

Reed has a great matchup against the Giants, a team that always has issues stopping opposing TEs.

Everything about this matchup screams "avoid." Stafford is banged up and the Denver defense is incredible. Avoid Stafford this week. Hopefully you have a better option. I don't consider him a Top 20 QB this week.

This one might seem a bit obvious in light of Brees' potential shoulder issues. If he plays, Brees is going up against a strong Carolina Panthers defense. If you own Brees, it's best to add a backup in the event he can't play. Even if he plays, it might be best to live him on the bench.

Martin is worth starting as an RB2 or flex if he has the right matchup, but that's not the case this week. He's going up against the Houston Texans, who have shut down opposing RBs this season. Leave him on your bench.

Miller has been downright awful so far. He has a difficult matchup against the Buffalo Bills and is nursing an ankle injury. Try to avoid playing him this week.

The Giants are in the midst of a time-share at RB. Jennings gets the bulk of the carries, but he hasn't done much with them so far. He's got a tough matchup against the Redskins and Shane Vereen could end up being on the field more often.

I still like Cooks for the rest of the season, I'm just a bit worried about him this week. If Brees can't go, it's a safer play to sit Cooks. His matchup against the Panthers isn't ideal either.

You have to play Calvin Johnson if you own him, but that's not true about Tate. He's got a hellacious matchup against the Broncos and is best left on the bench.

Cooper had a great Week 2, but he could have a rough go this week. There is a good chance he's matched up against Joe Haden. Plus, the Browns have a strong secondary. Leave Cooper on your bench if you can.

Ertz will be a worthwhile fantasy starter in the near future, but not this week. He was the most-targeted player for the Eagles last week, and recorded only one point. He's got a tough matchup this week against the Jets.

It's tough to really consider any NFL QB a sleeper, since they are all so well known. Bortles is a free agent in the vast majority of leagues, but he has a good matchup against the Patriots. Their secondary isn't great, and Bortles could have to throw the ball quite a bit. If you're really desperate, like 2-QB league and you have Tony Romo and Drew Brees desperate, Bortles could get you some decent points this week.

This would be a very risky play. Dunbar gets almost all of his work in the passing game and the Cowboys will likely look to run the ball more with Romo injured. However, defenses are going to load the box to stop the run, so screens and swing passes could be plentiful. The Falcons have given up points to RBs this season, but the damage his been through the air and not on the ground.

Matthews is the No. 2 option in Miami (while DeVante Parker is out) and he could produce for you if you're desperate. He's owned in hardly any leagues.

Gilmore is owned in very few leagues, so you could likely add him. It appears to be a bit of a down week for TEs and Gilmore is coming off a massive week. It's unlikely he'll match his effort from Week 2, but he could have success against a Bengals defense that often struggles against TEs.