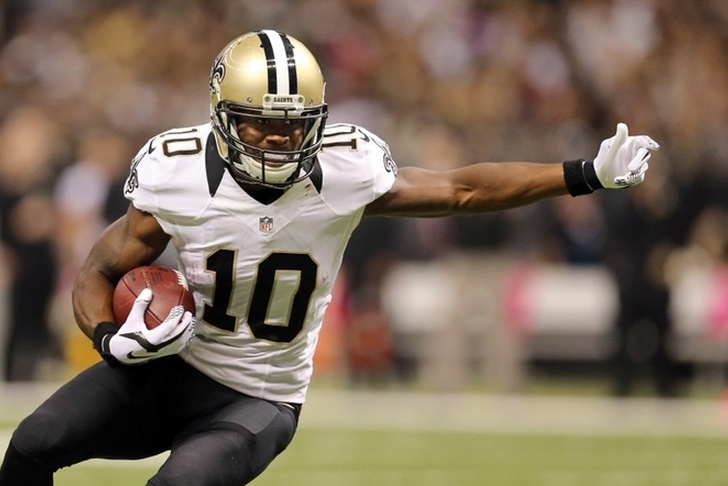 Week 10 of fantasy football is here. The waiver wire has already opened and you're likely trying to figure out your lineup for this weekend. If you're having issues, we're here to help. You won't see your studs on this start 'em or sit 'em list. Of course you're going to start Adrian Peterson, Julio Jones and Aaron Rodgers. You don't need me to tell you that. This list is designed for the fringe players. If you're unsure which of your options to go with, this list can help. The sleeper section is designed for those in deep leagues, or if you're really desperate. With that in mind, here are your start 'em, sit 'em and sleepers for Week 10.

Newton had played well in recent weeks and that shouldn't change against the Titans. It's a strong matchup for Newton, who could be in for a big game.

Dalton is tied for the fourth-most fantasy QB points (I know, right?) and is a solid start this week. The Texans' defense was strong last year, but not so much this season. Feel safe starting Dalton.

Forsett started slowly, but he played well in the few weeks before the team's bye. Against the Jaguars, Forsett should have another strong game.

This one might be too obvious after Williams' monster game last week. He now gets the Browns' run defense, which is one of the worst in the league. Expect a big game from Williams.

Maybe don't start Darren Sproles, but Ryan Mathews and DeMarco Murray are good to go as a Flex and high-end RB2. The Dolphins haven't stopped opposing RBs, so the Eagles could have a big day on the ground. Murray could have a huge game and Mathews should get enough touches to justify a start.

Robinson could be primed for a massive game against the Ravens. Their secondary has major issues and the Jaguars might be forced to throw it a ton. Plus, Allen Hurns is nursing an injury, which could mean even more targets for Robinson.

Landry has been solid this season, and borderline incredible in PPR leagues. Going against a poor Eagles secondary could mean a monster game for Landry.

Cooks has played well the past two weeks and that should continue against a bad Redskins secondary. If you've held onto Cooks through his slow start, you might be rewarded this week.

Reed has played incredible this season, when he's been healthy. That shouldn't change against the Saints and their poor secondary. Reed is still on the waiver wire in 25 percent of leagues, so grab him if you still can.

Palmer has played well this season, but he's had great matchups in the process. That's not the case this week, as the Cardinals face the Seahawks. Palmer won't reach the numbers he's put up earlier this season. Play someone else.

I had high expectations for Wilson this season, but he hasn't delivered. That's due in large part to a shoddy offensive line, but the end result is still that Wilson has struggled as a fantasy player. He's got a touch matchup against a good Cardinal secondary.

Yeldon has played well in the past few games, but he has a tough matchup against the Ravens. Playing Yeldon means you're banking on a TD, and that's a dangerous game.

Andre Ellington, Chris Johnson and David Johnson should all be on the bench this week. Chris Johnson was getting the bulk of the carries, but all three will do little against the Seahawks' run defense.

Shane Vereen, Rashad Jennings, Orleans Darkwa and Andre Williams are all getting touches for the Giants. That's a running back-by-committee straight out of a Wes Craven movie. Avoid all of these players, especially since their matchup isn't great. Vereen could be a PPR flex this week, but that's about it.

Going up against a great Broncos secondary means Maclin needs to stay on your bench. Maclin has been inconsistent this season and you shouldn't expect much from him this week.

Yeah, so avoid Cardinals players this week. Larry Fitzgerald, John Brown and Michael Floyd all need to stay on your bench this week. It's simply too difficult a matchup.

Dorial Green-Beckham had a nice week, but don't go chasing him. Kendall Wright isn't worth a start either and that's because the Panthers' defense is one of the best in the leagues. Josh Norman will shut down his man and the rest of the Carolina secondary is up to the task.

I know Owen Daniels is coming off a big week, but I don't trust him. His performance screams "flash in the pan." Plus, Vernon Davis is on the roster. Until someone proves they can consistently produce, avoid them both.

Flacco is owned in less than 50 percent of leagues. He has few weapons, but he's still a Top 15 fantasy QB this season. If you're desperate because of injuries or byes, Flacco is a nice sleeper option.

I know, I know. Jones hasn't done much in recent weeks, but he is getting the bulk of the carries. The Saints' run defense isn't great, so there is some upside here. If you're really desperate, this isn't a terrible move.

Someone has to catch passes in Baltimore. Aiken is the No. 1 WR, so it's surprising he's owned in less than 50 percent of leagues. You can do a lot worse than starting Aiken if you're desperate.

I hate chasing touchdowns, but tight end is the position to do it with. Rodgers is seeing red zone looks and he's going up against a Detroit defense that doesn't cover TEs very well. Maybe you can luck into a score or two.