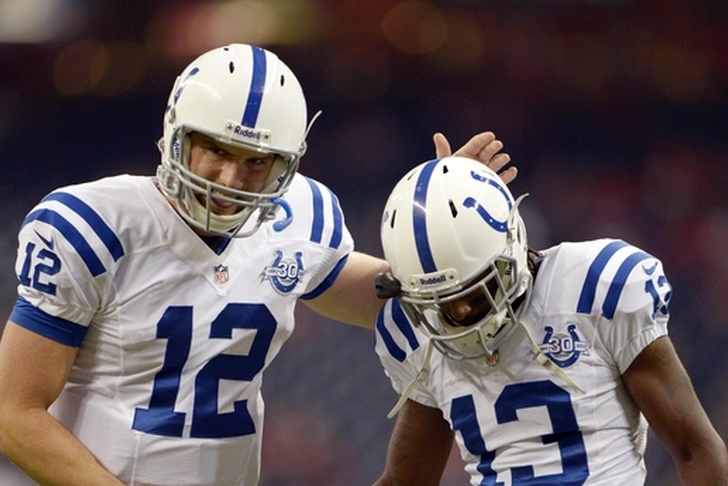 Week 9 of fantasy football is nearly here. The waiver wire has already opened and you're likely trying to figure out your lineup for this weekend. If you're having issues, we're here to help. You won't see your studs on this start 'em or sit 'em list. Of course you're going to start Adrian Peterson, Julio Jones and Aaron Rodgers. You don't need me to tell you that. This list is designed for the fringe players. If you're unsure which of your options to go with, this list can help. The sleeper section is designed for those in deep leagues, or if you're really desperate. With that in mind, here are your start 'em, sit 'em and sleepers for Week 9.

Maybe this one is a bit too obvious, but Rivers is a must-start in every format this week. He's played wonderful as of late, as the Chargers lack of a running game has forced Rivers to air it out. He'll miss WR Keenan Allen, but the Bears have serious secondary issues. Feel safe starting Rivers.

There is some risk with this, as Dalton has historically played poorly in prime time games. However, this is a great matchup against a bad Browns defense that won't have Joe Haden. Dalton is the fifth-best fantasy QB (I know, right?) and is a solid start this week.

The Browns have one of the worst run defenses in the NFL, which means it's a great matchup for Jeremy Hill and Gio Bernard. Both Hill and Bernard are worth starting, with Hill a perfect RB2 and Bernard the perfect Flex. It'd be better if only one player saw the bulk of the carries in most weeks, but feel safe playing them both against the Browns.

With Le'Veon Bell out for the season, Williams is going to at least be a RB2 the rest of the season. The Raiders have a decent run defense, but Williams should get enough touches to put up solid fantasy numbers.

Langford isn't Matt Forte, but he's worth starting this week. The Chargers have struggled stopping the run, and Langford should see the bulk of the carries. If you lost Forte and were able to sign Langford, feel safe plugging him into your lineup.

Cooper struggled last week, but he was on Revis Island. This week, he goes against a Steelers' pass defense that has been torched by No. 1 WRs this season. Cooper could be in for a big week.

Hurns' fantasy efforts have been saved by touchdowns in recent weeks, but he could see more targets against the Jets. With Allen Robinson on Revis Island, that should result in Bortles targeting Hurns more often. I like Hurns as a solid flex start.

Decker has scored in all but one of his games this season, and he could do so again this week. I feel much better about him now that Ryan Fitzpatrick will start and he's another quality flex play.

Reed has played incredible this season, when he's been healthy. That shouldn't change against the Patriots. Reed is still on the waiver wire in plenty of leagues, so grab him if you still can.

Luck won't be the last Colt on this list, as he has a wicked matchup against the Broncos. Luck has struggled with turnovers this season, and he's best left on your bench.

Bortles is the 10th best fantasy QB (I know, right?) but he should drop after this week. He has a rough matchup against the Jets, who have shut down fantasy QBs not named Tom Brady. Play someone else.

Yeldon has played well in the past few games, but he has a tough matchup against the Jets. Sure, Latavius Murray played well against them, but I wouldn't bank on Yeldon doing the same. Playing Yeldon means you're banking on a TD, and that's a dangerous game.

Shane Vereen, Rashad Jennings, Orleans Darkwa and Andre Williams are all getting touches for the Giants. That's a running back-by-committee straight out of a Wes Craven movie. Avoid all of these players, especially since their matchup isn't great. Vereen could be a PPR flex this week, but that's about it.

Gore has played well at times this season, but the Denver run defense should shut him down. Much like Yeldon, playing Gore means you're banking on a TD.

I mentioned this earlier, but Robinson has a tough matchup against Darrelle Revis. He's been great so far this season, but Robinson is best left on your bench if you have better options.

Cobb faces Josh Norman, who is quickly (and quietly?) becoming one of the best CBs in the NFL. He's a stud and a fantasy owner's worst nightmare. Don't play Cobb if you have better options.

Hilton was shut down by Norman last week and now faces a great Bronco defense. Keep Hilton on your bench, like you hopefully did last week. I get that it's tough to sit all three of these WRs mentioned, but I don't expect them to put up even passable fantasy numbers.

With six teams on bye, it's tough to really sit anyone at TE. However, Witten has struggled in the past few games (blame his QBs) and has a tough matchup. The Eagles do a solid job of shutting down TEs, so don't expect much from Witten.

If you're desperate, Taylor is a strong option. He is available in just over 50 percent of leagues, as he's missed the last two games and had his bye. There is risk, but Taylor was a strong fantasy QB before he was injured.

Andrews is owned in just over 50 percent of leagues, and he might just get the vast majority of the carries against the Saints. He's not much more than a flex play, but with so many teams on bye, he's a decent high-upside sleeper.

Johnson has been quite since Week 2, but he has a chance to re-emerge with Allen out for the season. He's owned in 53 percent of leagues, 10 percent less than Malcom Floyd. Johnson could see plenty of targets with Allen out. I really like him in PPR formats.

This one carries tremendous risk, because Seferian-Jenkins might not be able to play. However, if he can, this is a great sleeper move. The Giants are awful against TEs, and Seferian-Jenkins had a monster opening game. It's a very risky move, but there is plenty of upside, too.