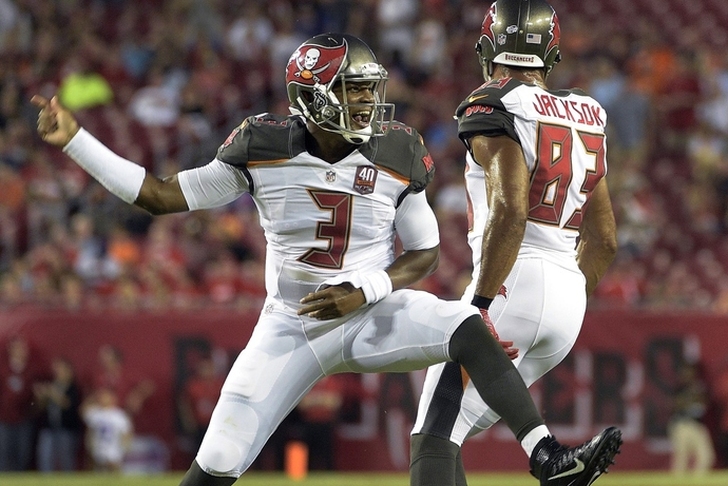 Week 14 of fantasy football is here and it's likely playoff time in your league. If you're having issues trying to figure out your lineup, we're here to help. You won't see your studs on this start 'em or sit 'em list. Of course you're going to start Adrian Peterson, Julio Jones and Tom Brady. You don't need me to tell you that. This list is designed for if you're unsure which of your options to go with. The sleeper section is designed for those in deep leagues, or if you're really desperate. With that in mind, here are your start 'em, sit 'em and sleepers for Week 14.

Taylor doesn't throw it a ton, but he makes up for it with touchdowns and rushing numbers. He's been hot lately and that should continue against an Eagles defense has allowed more fantasy points to QBs than any other defense in the last month.

Fitzpatrick has played very well in recent weeks and that should continue. He faces one of his (many) old teams in the Titans, who haven't been able to stop opposing offenses this season.

The Dolphins finally gave Miller a steady workload and he ran for 100 yards in a Miami win last week. Expect more of the same against a Giants' defense that has issues stopping the run. Miller could produce RB1 numbers this week.

The Vikings had a good defense, but they're banged up and coming off a short week. Johnson showed what he could do against the Rams and should remain the feature back. He's at least worth a flex play.

Martin has been a bit inconsistent this season, but he's produced some massive games that have him third among all fantasy RBs. He could go off against a very bad Saints defense this week.

Watkins has been hot lately and that should continue for the rest of the year. He has easy matchups the rest of the way, starting with the Philadelphia Eagles this week.

The Bucs face the Saints, which should mean big fantasy days for most of the offense. Mike Evans is an obvious start, but Jackson is worth playing as well. He could produce WR2 numbers.

Decker has killed it this season and should do the same against a bad Titans' secondary. He's at least worth a WR2 play.

Thomas has caught a TD in three straight games and has played well in recent weeks. He has a decent matchup this week and should post solid numbers.

Ryan hasn't been a great fantasy QB in recently and that's unlikely to change this week. He's going up against a stout Panthers' defense that has shut down most fantasy QBs. The Saints had a surprisingly successful game last week, but I don't expect the Falcons to replicate that performance.

Rivers has seemingly hit the fantasy wall; struggling to put up solid numbers. He's has a tough matchup against a Chiefs' defense that has played well this season. Rivers could find his previous form, but it's too risky. With injuries at WR and the offensive line for the Chargers, try to find someone else.

Lacy had back-to-back 100-yard efforts before getting himself benched last week because he missed curfew. Lacy could bounce back, but it's too risky to play him. If you have better options, leave Lacy on your bench.

Allen's been wonderful since taking over for Justin Forsett, but that should change this week. He's going up against a strong Seattle defense and isn't worth starting this week.

A late touchdown saved McFadden last week, who fumbled twice. The Cowboys offense is struggling McFadden's lack of production isn't helping. Leave him on your bench this week.

Cobb is a big name, but has not been producing. He's topped eight points just once since Week 2. He got lucky last week by scoring a touchdown on a fumble. The Cowboys' secondary has actually been pretty strong this year, so don't expect Cobb to find his old form.

Diggs posted four straight games of at least eight points, with 12 points in three of those, but has struggled since then. He's failed to top six points in five consecutive games. Going up against a strong Cardinals' defense doesn't help.

Ginn has posted 10 points, zero points and 20 points in his last three games. He's been wildly inconsistent, and could struggle this week. He's going up against a strong Falcon secondary, so don't expect much this week.

No Romo hurts Witten. He's failed to post seven points in nine of his last 10 games. He'll get a few catches, but Witten shouldn't be starting in standard leagues.

Winston isn't owned in many leagues, which makes him a solid sleeper pick. He's going up against a Saints' defense that has allowed a ton of fantasy points this season. If you're desperate, Winston could put up top 10 fantasy numbers this week.

Draughn is owned in plenty of leagues, but not many are starting him. He hasn't been that productive, but he's getting enough touches to merit owning. This week, he faces a Browns' defense that just can't stop the run. Draughn could be in for his best game this year.

Parker has put up 12 points in each of the last two weeks, after posting just four all season long. He has talent and is a red zone threat. He's owned in just 40 percent of leagues and has a strong matchup this week.

Seferian-Jenkins is finally back, although he only posted three points last week. He's a perfect sleeper option and could go off against a bad New Orleans defense.