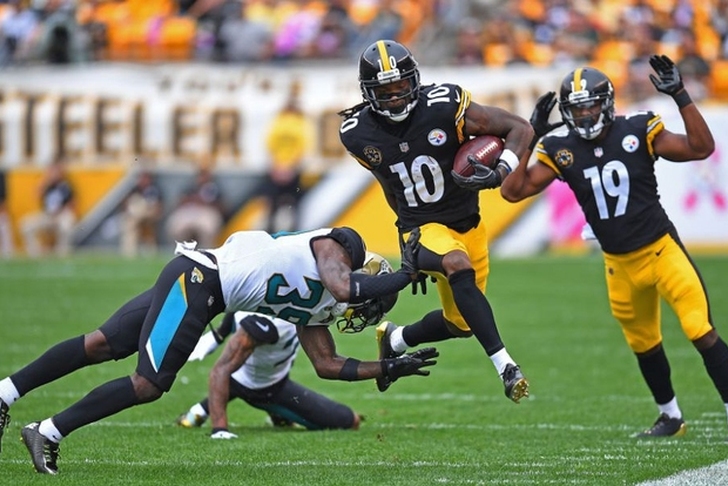 We are getting close to crunch time for the fantasy football season and two names that I have been getting a ton of questions on both play wide receiver for the Pittsburgh Steelers.  The question is who has more fantasy value for the rest of the season, Martavis Bryant or JuJu Smith-Schuster?  If you want a more in-depth update on these players fantasy values then check out The Fantasy Football Rumors Podcast. If you have more decisions regarding these players and need extra help then hit me up on Twitter @MitchellRenz365 and I will help you out.

This wouldn't even be a question if JuJu wouldn't have missed Sunday Night's game against the Green Bay Packers with a hamstring injury. Bryant played a larger role in the game and ended up with four catches for 40 yards and one touchdown. So now the question arises,  who is the better guy to own in fantasy football?

After the game starting quarterback, Ben Roethlisberger praised Bryant for his touchdown route and catch.

"What a great route. He had the look and we practiced that route. Once he got outside he was even. When he's even, he's leaving. So I put it out there and let him run under it."

JuJu is expected back in Week 13 and I believe he will be the wide receiver two on the team simply because he has earned that role. However, Bryant has the talent and may start to get a few more targets and touches going forward. For now, Juju is still the guy I'd rather own as a safe flex wide receiver and Bryant is a WR4. If he is on the Waiver Wire he is worth an add but I wouldn't blow your entire FAAB on him. Let me know who you think is more valuable for fantasy football in the poll below.

Who has more #FantasyFootball value for the Rest Of the Season and why? #HereWeGo

If you like NFL news and fantasy football rumors, luckily for you Tom Downey and Mitchell Renz talk rumors and much more on The Fantasy Football Rumors Podcast.