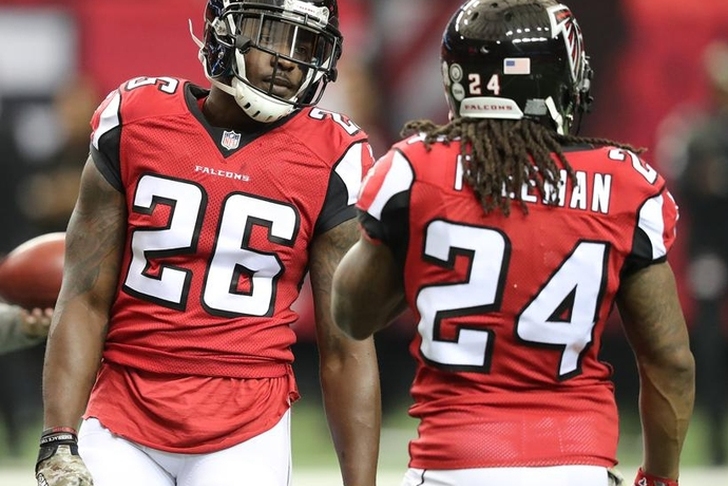 We are getting close to crunch time for the fantasy football season and three players who I've been asked frequently about this week regarding their fantasy value are Atlanta Falcons running back Tevin Coleman, Carolina Panthers tight end Greg Olsen, and Denver Broncos wide receiver Emmanuel Sanders. If you need an update on Sunday morning then check out  The Fantasy Football Rumors Podcast which broadcasts live on Periscope and Twitter at 9am ET covering all notable Fantasy Football Injuries every Sunday. If you can't wait until Sunday hit me up on Twitter @MitchellRenz365 and I will help you make the best lineup decisions.

Tevin Coleman Week 12 Fantasy Value
Entering Week 12 Tevin Coleman's fantasy value rested on the shoulders of whether or not starting running back Devonta Freeman was going to play. As expected Freeman will miss his second straight week due to a concussion.

So is Coleman a safe start going up against the Tampa Bay Buccaneers? The answer to that question is yes, most definitely. Coleman has had 20 carries and a touchdown in two straight games and the Buccaneers are allowing the 13th most fantasy points to running backs this season. The Falcons are starting to click on offense scoring 27 and 34 points in the last two weeks which should continue to lead to scoring opportunities for Coleman. Start him as a safe RB2 in Week 12.

Greg Olsen Week 12 Fantasy Value
Olsen underwent a surgery to repair a foot injury suffered in Week 2 and is expected to return Week 12. Last week Olsen confirmed that the plan has been for him to play against the Jets all along.

#Panthers TE Greg Olsen confirms the plan is for him to be at practice tomorrow and be ready for next week’s Jets game!#KeepPounding pic.twitter.com/wHJVknB0wn

With the current landscape of tight ends in the NFL, if Olsen plays he is a no doubt start and a TE1. He should jump right back into playing the full amount of snaps and against a Jets team that has allowed 67 receiving yards or more to tight ends in five of the last six games, consider Olsen a must-start tight end once again.

Emmanuel Sanders Week 12 Fantasy Value
The Broncos made some changes this week firing their offensive coordinator Mike McCoy and now quarterbacks coach Bill Musgrave will take over as OC. That wasn't the only change the Broncos made, they will be starting 2015 first round draft pick, quarterback Paxton Lynch.

With such a high volume of targets and in a favorable matchup for the Broncos, consider Sanders a WR2 in Week 12.

If you like NFL news and rumors, luckily for you Tom Downey and Mitchell Renz talk rumors and much more on The Fantasy Football Rumors Podcast.