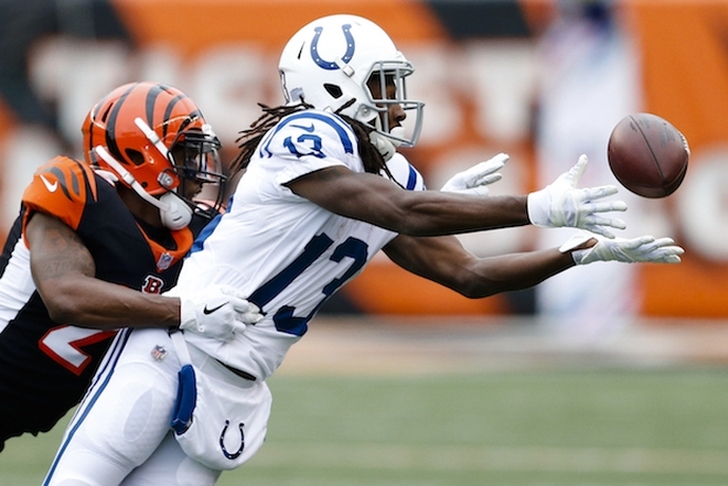 The NFL trade deadline is Tuesday, October 31 which could mean a different scenery for the three players below. The trade rumors have been swirling with T.Y. Hilton, Martavis Bryant, and Eric Ebron. All three players have struggled this season in regards to the hopes of their actual NFL teams and the owners who drafted these players in fantasy.

The reason behind this article is to help people out before the trade deadline. Do you buy low on these players in hopes that they are traded and they can turn around their fantasy season, or perhaps you can sell them high in hopes that someone is willing to buy into a change of scenery will help their fantasy football value?

If you have more fantasy questions or are looking to break into the fantasy football industry hit me up on Twitter @MitchellRenz365. I would be more than happy to help.

1.) T.Y. Hilton - Indianapolis Colts Wide Receiver
The last three weeks Hilton has five receptions for 61 yards on 19 targets. He is frustrated and isn't afraid to say it. After their Week 7 loss Hilton was quoted saying "It's the offensive line, they need to block." He isn't wrong though, this line has been bad and is a major reason why franchise quarterback Andrew Luck probably won't play this season. Yea I said it, I would be shocked to see Luck return this season.

Fox' @jayglazer reporting that Luck will be visiting specialists to look at his shoulder, and if team doesn't get answers, they will shut him down for the year.

With the season the Colts are having and with the offensive line issues why would they rush back their franchise player? The answer is they won't. This is obviously a huge loss for Hilton and his fantasy stock is free falling. Personally, any situation he goes to will be better than his current situation for this season only. The Colts aren't able to get Hilton the ball this year because the line isn't good enough for Hilton to run the routes he excels at. If I own Hilton in a dynasty league I am holding onto him and hoping he remains a Colt but if it's a redraft league I am hoping he gets traded and I am trying to sell him.

2.) Martavis Bryant - Pittsburgh Steelers Wide Receiver
If Martavis Bryant stays a Steeler he will not have any fantasy value and can be dropped in all leagues. It's the JuJu Smith-Schuster show and he has played great. On Sunday Night football he had seven catches, 193 yards, and one touchdown. That game was in large part to this 97-yard touchdown catch.

A catch like this tells me that the Steelers don't need Bryant because JuJu can make the big plays too. Sure he isn't the athlete that Bryant is but with all the off-field issues Bryant has made the Steelers deal with plus poor field play they should trade him. And if you own him in fantasy you should try and trade him as well because I'm worried about Bryant's future in the NFL.

3.) Eric Ebron - Detroit Lions Tight End
The fourth-year tight end who was a first-round draft pick has been a disappointment. I can probably give you that sentence alone and you'd know who I am talking about. He has one game this season with more than two catches and only three games with double-digit receiving yards. I hyped up Ebron this offseason and I wasted enough sentences on him then. Keeping this one simple, I am done with Ebron in fantasy football, and I encourage you to be done with him also no matter where he gets traded if it happens.