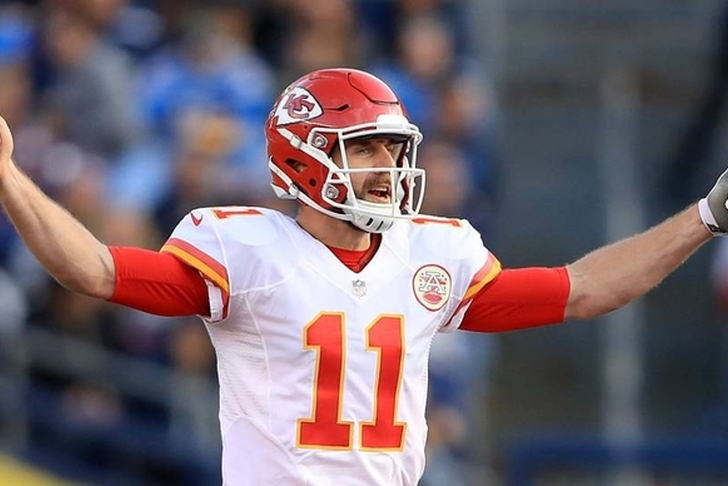 After a weekend jam packed of football, some of us are experiencing a fantasy hangover Monday morning. Monday is always a day where people overreact to the games that happened this past week. This is especially true Week 1 of the NFL season. People go into panic mode because their star player didn't perform so they think picking up some random guy on the waiver wire that had the game of his career is a good idea.

If you missed the Sunday and Thursday night football action or just want a refresher you can....

- WATCH: NFL Recap - All the NFL Highlights From Today Presented By Mizzen and Main

The 5 Players below are players who either had great weeks and we need to pump the brakes on their hype trains or players who struggled and you need to R-E-L-A-X because it's only one underwhelming week.

Pump the brakes people.  I can guarantee Smith will not throw for 368 yards and four touchdowns every week. Did he and the Kansas City Chiefs offense look good? Of course, it did but I will not be going out of my way to pick up Smith off Waivers and drop a quarterback like Kirk Cousins. We are talking about a guy whose career high in passing yards in a season is 3,512. Only 3,512 in 12 seasons not really impressive.The Chiefs will be home against the Philadelphia Eagles in Week 2. If Smith continues to impress then it will be time to make some changes but I will not be overreacting to one good game after watching Smith for 12 seasons.

A prime example of an R-E-L-A-X moment. Believe me, the Browns are an ideal matchup and it stinks that Bell had a rough week but it's only Week 1. Bell will be great this season. Bell averaged 157 total yards a game which on a 16 game pace is 2,512 which would be an NFL record. Now that David Johnson is out for a few weeks, if Bell is able to stay healthy he is the "wild card" at the running back position. The Pittsburgh Steelers will battle the Minnesota Vikings at home in Week 2. Expect Bell to get back on track and be that "Bell" cow you drafted.

The Indianapolis Colts looked like the worst team in the NFL as they lost 46-9 to the Los Angeles Rams. I have seen people trying to trade away TY Hilton for a sack of potatoes and a kicker. Hilton's fantasy stock has definitely taken a hit but I want Hilton for the end of the season during the fantasy playoffs when Luck is healthy. I play to win, a mentality of "if you're not first you're last." You drafted Hilton high, stick with him. It would be like buying a brand new car and after a week trading it in for parts. The Colts have another tough matchup with the Arizona Cardinals in Week 2 so I wouldn't recommend starting Hilton but you should still hold onto him.

All offseason I was preaching how Hill will be a bust at his current draft price and well he made me look dumb Week 1. Hill played well but his numbers don't fully tell the entire story. His long touchdown catch was on the broken coverage of Patriots cornerbacks. Broken coverage on the New England Patriots simply doesn't happen. We can all agree this was a strange game. I will admit Hill looked better than what I expected. With that being said I would still be willing to bet he doesn't finish as a top 20 wide receiver. Hill will get the Eagles next week and likely face their new cornerback Ronald Darby.

How can Eric Ebron only score 2.9 fantasy points when Matthew Stafford throws for four touchdowns? The answer is simple, the Arizona Cardinals are the best team in the NFL at defending tight ends. In 2016 the Cardinals were by far the best at stopping tight ends allowing only three catches for 26 yards a game to all tight ends on the teams they were playing. The Detroit Lions will be playing the New York Giants in Week 2. A Giants defense who allowed old man Jason Witten to find the end zone.