Fantasy Football Final: Everything You Need To Know From Week 15's Action 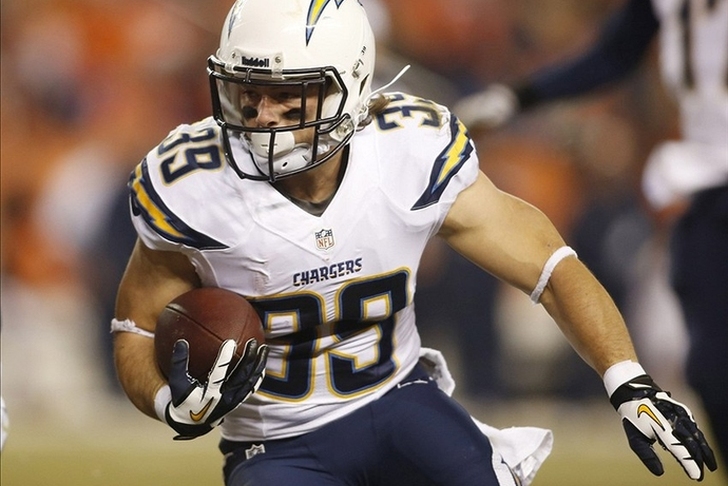 Only the last Week 15 game is left, and I'm here to recap what happened in the wide world of fantasy football. I won't list everyone's individual stats, as that's something you probably already know or can easily look up. Instead, I'm going to give you one note from every team and what it might mean to your fantasy team going forward. So, here's everything you need to know from Week 15's action.

St. Louis Rams 31, Tampa Bay Buccaneers 23
It's all about Toddy Gurley and Tavon Austin fantasy-wise for the Rams. Gurley wasn't that great, but did score. The Rams made sure to get Austin the ball, something they've been inconsistent about this season, and he produced two TDs. He's still a risky play.
Jameis Winston threw the ball 50 times, so he put up decent numbers as a result. Doug Martin had just nine points, while Mike Evans had 157 yards through the air. However, Evans caught just nine passes on an impressive 17 targets. That's not a type.

New York Jets 19, Dallas Cowboys 16
Eric Decker terrified fantasy owners (like myself) when he went down with a knee injury and fumbled. However, the officials ruled Decker down and he returned to the game to catch a TD pass. Brandon Marshall and Bilal Powell played well, but Chris Ivory was a non-factor.
Dex Bryant finally found the end zone again, thanks to a nice catch and run on a screen. Darren McFadden put up decent numbers, but the Cowboys are still limited by major issues at QB. Kellen Moore is basically a younger, lefty handed version on Matt Cassel, but at least the Cowboys tried playing him.

Carolina Panthers 38, New York Giants 35
Another day and another massive game from Cam Newton. He threw 5 TD passes and ran for 100 yards on the ground. He led all fantasy scorers with 41 points. Ted Ginn caught two TD passes again, while Greg Olsen had a strong game.
The Panthers normally great defense let the Giants get back in the game. Rashad Jennings somehow posted 107 yards and a TD and Shane Vereen had a strong day as well. Vereen is a decent PPR flex, but I still refuse to trust any Giants RB in standard formats. Odell Beckham posted a solid game thanks to a TD late.

New England Patriots 33, Tennessee Titans 16
Ron Gronkowski found the end zone on the first drive, which was huge because the Patriots cruised to a win in this one. Tom Brady was solid, although he did lose Danny Amendola again. Joey Iosefa was the Pats' top RB on the ground, because Bill Belichick hates fantasy football. James White had 71 yards and a TD in the air.
Marcus Mariota went out early, which might have ruined a team or two's chances. Dorial Green-Beckham had a strong game. I'm not sure if he's going to be underdrafted or overdrafted next season. TE Delaine Walker caught just two passes, but both went for scores.

Atlanta Falcons 23, Jacksonville Jaguars 17
Julio Jones and Devonta Freeman both found the end zone and had strong games. Matt Ryan wasn't great, as he has struggled lately. He's posted 12 points or less in four straight games. With the Panthers up next, Ryan could have another rough game next week.
The Jags didn't really run the ball, as Denard Robinson had just 28 yards. His 46 receiving yards helped him out. Blake Bortles had another solid game, with 10 points coming via the ground game helping a ton. Allen Robinson found the end zone once again.

Houston Texans 16, Indianapolis Colts 10
DeAnder Hopkins, with yet another QB in Brandon Weeden, posted 94 yards. Alfred Blue posted 100-plus yards as well, but I don't trust him going forward. The Colts' defense is really bad.
Donte Moncrief had 10 points, but everybody else struggled. Frank Gore had four points, Andre Johnson had three and T.Y. Hilton had just two. The Colts are a mess right now.

Washington Redskins 35, Buffalo Bills 25
Kirk Cousins had a monster game, posting 35 fantasy points. DeSean Jackson and Jordan Reed were the biggest beneficiaries of that. Even Alfred Morris had a decent game. The Redskins are hot, in real life and fantasy.
Sammy Watkins had yet another monster game, with 23 fantasy points. LeSean McCoy left with a knee injury, hurting many owners. Tyrod Taylor had a solid game, thanks to his running abilities.

Kansas City Chiefs 34, Baltimore Ravens 14
Charcandrick West had a nice day on the ground, as he had the bulk of the carries. Travis Kelce had seven points and Jeremy Maclin added 50 yards and a TD.
Kamar Aiken had 128 yards and caught a Hail Mary TD pass to post strong numbers. Buck Allen had just four carries, while Terrance West had seven for 35 yards. The Ravens' injuries have turned them into a fantasy mess.

Seattle Seahawks 30, Cleveland Browns 13
It looks like the Seahawks' new starting RB is Christine Michael. Time to go add him after he had 84 yards on 16 carries. Doug Baldwin and Russell Wilson continued their absurd play. Tyler Lockett and Jermaine Kearse posted strong numbers. Wilson is on fire and is going to win a ton of championships for fantasy owners this year.
The Browns are not a great fantasy team, especially against a good defense. Duke Johnson had seven fantasy points, but doesn't get enough touches to merit starting. Gary Barnidge scored, but no other skill players had more than two points.

Green Bay Packers 30, Oakland Raiders 20
The Packers weren't that great fantasy-wise. Aaron Rodgers was okay, but he's had better efforts. James Jones had 82 yards and a TD, but had one taken away because of pass interference. Eddie Lacy did nothing, as James Starks outplayed him again. Lacy has been very frustrating this season.
Amari Cooper had a monster game, with 120 yards and two scores. Latavius Murray and Michael Crabtree both had seven points. Derek Carr was hurt by two picks.

Cincinnati Bengals 24, San Francisco 49ers 14
Jeremy Hill had just 31 yards and a fumble, but two TDs made up for that. Marvin Jones had eight points, but the rest of the team struggled. A.J. Green was limited to just one catch for 37 yards and Gio Bernard had four points.
The 49ers are a fantasy mess. Anquan Boldin had a nice game, but there isn't anyone that you should be playing each week on this team.

Pittsburgh Steelers 34, Denver Broncos 27
Antonio Brown had a huge game, with 16 catches for 189 yards and two scores. PPR owners who had him are doing backflips. He led all WRs with 30 points in standard scoring. DeAngelo Williams and Markus Wheaton had strong games thanks to TDs. Ben Roethlisberger and DeAngelo Williams were sharp as well.
Brock Osweiler had a strong fantasy day, although I doubt many started him. The running game didn't do much and that remains a position to avoid. Emmanuel Sanders and Demaryius Thomas both had strong games.

San Diego Chargers 30, Miami Dolphins 14
Philip Rivers had a strong game, but he wasn't the most impressive Charger. That belongs Danny Woodhead. PFT Commenter's favorite player had just 60 yards of offense, but scored four times.
The Dolphins forgot to give the ball to Lamar Miller again. He had just 11 touches for two fantasy points. Making matters worse, Jay Ajayi and Ryan Tannehill had a TD runs. The Dolphins didn't have much success fantasy-wise.

Arizona Cardinals 40, Philadelphia Eagles 17
David Johnson just made a lot of owners very happy and many very angry. He had a monster game, dropping 40 points to lead all non-QBs. John Brown and Michael Floyd had okay games, while Carson Palmer and Larry Fitzgerald were sub-par. Blame it on Johnson, who didn't share the fantasy wealth.
The Eagles barely used DeMarco Murray, who has been a complete bust. He had just three yards. Sam Bradford had a decent game, although two picks in the 4th quarter hurt. Jordn Matthews appeared for a big game, as did Zach Ertz, but it's tough to completely trust either player.

Detroit Lions 35, New Orleans Saints 20
Matt Stafford threw 3 TDs, two which went to Golden Tate. Both Ameer Abdullah and Joique Bell found the end zone, making it one of the most productive games from the Lions' RBs fantasy-wise in a long time. Calvin Johnson was a complete non-factor, being targeted just once on pass that went for 19 yards.
The Saints had to throw the ball a ton because they were down early. That meant a bad day for Tim Hightower, who had a TD taken away from him because of a flag. Drew Brees and Brandin Cooks had monster games.