Fantasy Football Final: Everything You Need To Know From Week 10's Action 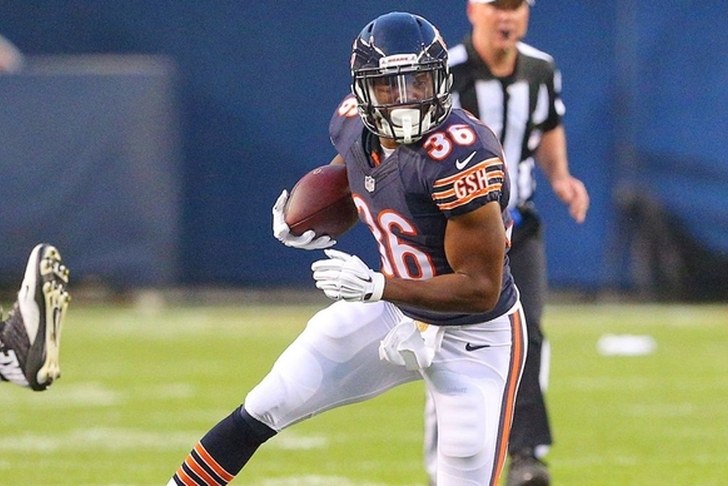 Only the last two Week 10 games are left, and I'm here to recap what happened in the wide world of fantasy football. I won't list everyone's individual stats, as that's something you probably already know or can easily look up. Instead, I'm going to give you one note from every team and what it might mean to your fantasy team going forward. So, here's everything you need to know from Week 10's action.

LeSean McCoy is still the top RB for Bills, but Karlos Williams gets enough touches to merit owning in deeper leagues. Don't panic about Sammy Watkins' poor day. Darrelle Revis shuts down most WRs he faces and Watkins was still targeted seven times.

Eric Decker just keeps scoring. He was targeted more often than Brandon Marshall against the Bills. Decker is at least worth a WR2 play most weeks.

The Lions' running game is just awful and there aren't any players worth owning at that position. Golden Tate had only four targets, fourth-most on the team. I don't trust as anything more than a bench piece.

Davante Adams had only 10 catches for 78 yards and no scores, but I've never been more excited about him in fantasy. That's because he had 21 (!!!) targets. Sure, that number is inflated by Rodgers throwing it 61 times, but Adams twice as many targets as anyone else.

Doug Martin is still getting the bulk of the carries, but he's best left as a matchup play. Mike Evans is getting a ton of targets with Vincent Jackson out and he's a WR1 as long as that continues.

This offense sucks without Tony Romo. Even Darren McFadden didn't play well this week. Everyone's value takes a big boost with Romo's likely return next week. Also, sign Romo while you still can.

Cam Newton continued his strong fantasy play against the Titans. His rushing ability is a big boost. TE Greg Olsen remains the only Panthers receiver worth playing.

Antonio Andrews did nothing against the Panthers, but they have a great run defense. Andrews remains a matchup play at best. The same goes for QB Marcus Mariota.

Jeremy Langford has done an amazing job replacing Matt Forte. He led all fantasy scorers this week. Langford is going to be a high draft pick next season, since Forte likely won't be back. However, Ka'Deem Carey is still getting a few carries each game. And when did Zach Miller supplant Martellus Bennett?

It finally happened. Todd Gurley had a down game. Of course, he still put 14 fantasy points thanks to a TD. The Rams didn't get Tavon Austin the ball, which is why he's tough to trust.

Kirk Cousins had a great matchup, but I don't think many expected him to torch the Saints and outplay Drew Brees in the manner he did. He was the top fantasy QB this week. Heck, both Alfred Morris and Matt Jones had strong fantasy games. I wouldn't recommend chasing any of those players.

Hello, Brandin Cooks! That's what his owners had been expecting this season. Don't panic when you see Mark Ingram had only five carries. The Saints threw the ball a ton, which means Ingram is on the bench in favor of C.J. Spiller or Tim Hightower. And yes, apparently Hightower is still in the league.

I'm a bit worried about Jay Ajayi eating into Lamar Miller's carries, but Miller is getting enough pass-catching work to make up for it. Miller has been amazing since Dan Campbell took over as interim head coach.

So I guess the Eagles just forgot about Jordan Matthews this week? It's shocking he had just five targets after torching the Cowboys defense.

Ben Roethlisberger wasn't supposed to play, but he sure had a monster game. Of course, only bad fantasy players started him. Both Antonio Brown and Martavis Bryant had huge games, and they are smart plays each week. Surprisingly, DeAngelo Williams didn't have a big day against the Browns' awful run defense.

Johnny Manziel put up a decent fantasy day, although his turnover issues hurt. He and Travis Benjamin seem to have a good rapport. Also, do the Browns even want to trying running the ball?

Bortles wasn't great against the Ravens, but he did find Allen Robinson and Allen Hurns for scores. Their owners are likely pretty happy. All Hurns does is catch touchdowns, but he's getting enough targets too.

Justin Forsett struggled against the Jags, which is disappointing. I expected more out of him, but he's still a RB2 going forward. WR Kamar Aiken had twice as many targets as anyone else, which is a good sign. He doesn't get that many red zone looks, but he'll catch passes.

Adrian Peterson had a massive game, which is great for his owners. However, everyone else on the Vikings struggled. WR Stefon Diggs is still worth owning and TE Kyle Rudolph is getting targets. He's just not turning them into fantasy points.

I wish the Raiders would run the ball with Latavius Murray more often. He had a bit of a down game, but he's still worth starting. QB Derek Carr's TD passes went to players that few own, which hurts Michael Crabtree and Amari Cooper owners.

TE Rob Gronkowski had a big day, thanks almost entirely to a 76-yard TD catch. WR Danny Amendola's fantasy value could take a big jump with the injury to Julian Edelman. He was on crutches after the game.

Eli Manning had a great game, delighting those that played him (likely as a bye week fill-in). Odell Beckham had a good game too, but it could have been better if that late TD was overturned. The Giants RB position is still one to be avoided.

Charcandrick West had a monster day, rewarding owners who took the risk and played him against a stout Denver defense. Jeremy Maclin and Travis Kelce, however, laid eggs.

Speaking of laying eggs, what on earth was that Peyton Manning? He ruined fantasy days everywhere, putting up -7 points. He completed just five passes and was picked off four times. At this point, is he even worth owning?

Very impressed with Carson Palmer's effort. He had a monster game against a very good secondary. Michael Floyd put together the better fantasy day because of a pair of TDs, but Larry Fitzgerald had more targets, catches and yards. I wish Andre Ellington was the starter instead of Chris Johnson.

Doug Baldwin had a surprisingly strong effort. He's tough to trust though, as this is just the second time he's top 10 fantasy points this season. Jimmy Graham has had a rough season. He didn't do much against Arizona, but he was the second-most targeted Seahawk.