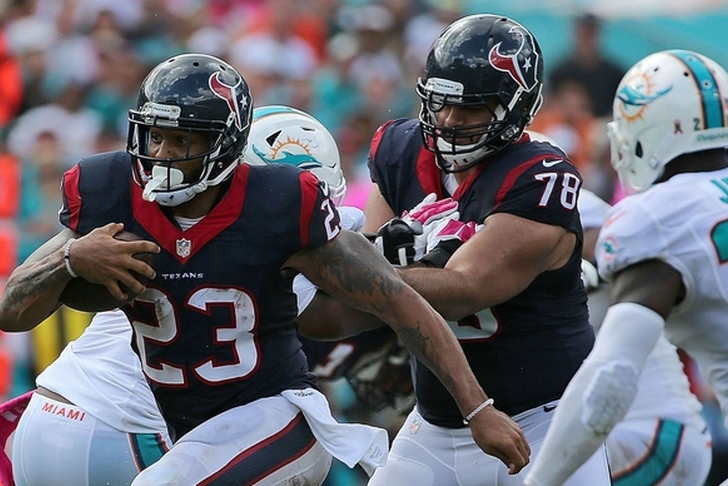 The loss of Arian Foster is a big blow to both the Houston Texans and his fantasy football owners. On the bright side, it's not as bad as the Jamaal Charles injury because Foster likely wasn't a high draft pick in your league.

The loss of Foster doesn't necessarily mean the end of your season. You'll need to find someone new to replace Foster, and here are the best options. Only players owned in less than 50 percent of leagues qualify. With that in mind, here are five fantasy running backs you should consider signing to replace Arian Foster.

I can't recommend one of the Redskins RBs because they are all in a committee that isn't really producing. The same can be said of Polk, but the difference is that it's very likely Polk is on the waiver wire in your league. I think Alfred Blue will be the starer (see below), but Polk will get some carries. He's got the potential to vulture a few touchdowns, too. Still, there are four clear superior options and consider Polk the desperation option.

Sims has posted strong numbers recently, as he's managed to catch a few touchdown passes. The downside is that is usage is limited and he's behind Doug Martin on the depth chart. I'm not a huge fan of Andrews, but he is getting the bulk of the carries. I prefer Bishop Sankey as an NFL RB, but the Titans staff seems to not feel the same way. At the very least, Andrews has scored this year, which can't be said about many RBs on the waiver wire. It's risky, but desperate times call for desperate measures.

Expect Blue to take back over as the Texans' feature back while Foster is out. Of course, it's unlikely he'll produce anywhere near the numbers Foster would. However, excluding one great game against the Texans, Blue was a bad fantasy option. Be careful with him and don't assumed he'll just replicate Foster's stats. After all the talk of Christine Michael being unleashed this week, it was McFadden who put together the massive game. While he only had so many carries because of an injury to Joseph Randle, it could be tough for Dallas to move away from McFadden now. He's worth adding, even if you didn't own Foster.