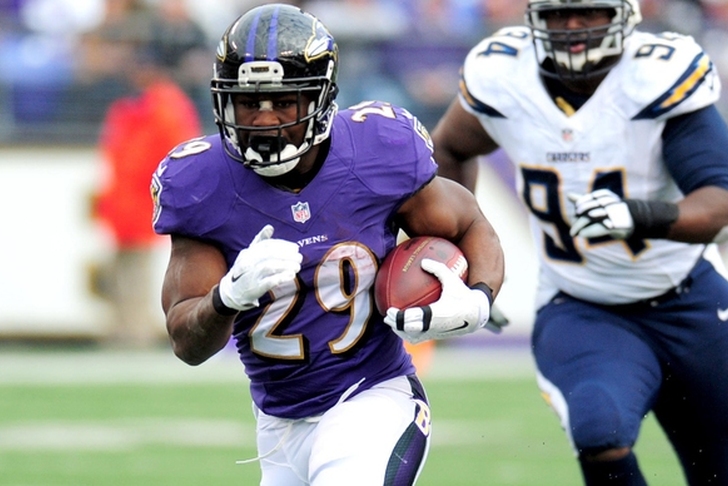 The loss of Justin Forsett, who could be done for the season after breaking his arm, is a tough blow to the Baltimore Ravens and his fantasy football owners. Forsett has underachieved at times this season, but he was a Top 20 fantasy back.

The loss of Forsett doesn't mean the end of your season. If you end up needing to replace Forsett, here are the best options. Only players owned in less than 50 percent of leagues qualify. But be warned, the options are not that great. With that in mind, here are five fantasy running backs you should consider signing to replace Justin Forsett. Let's get this out of the way: most of these options are poor ones in standard leagues. Sims is stuck behind Doug Martin on the depth chart, which hurts his value. He gets a few touches each game, but is really only valuable when he scores. Unless something happens to Sims, he's not worth playing. Like I said, the options are bad.

Sproles has PPR upside, but is the third RB on the Eagles' depth chart. With Ryan Mathews battling a concussion, Sproles gets a minor boost in value. It's not a great option, but at least Sproles is getting a few touches per game.

The Lions' running game has been awful this season and Joique Bell is actually getting more of the work in recent weeks. However, Abdullah actually has upside, something Bell lacks. He's not a great upside, but there is the slim chance Abdullah could find success before the season ends.

White is the one who took over as the third-down back when Lewis was hurt earlier this season, and I expect that to be the same going forward. The former fourth round pick wasn't active against Washington because he's not as good at special teams as Bolden is. He's worth adding in PPR-formats, but not really in standard ones.

With Forsett out, Allen is the top back in Baltimore. Allen, a former fourth rounder from USC, has some potential and could produce decent fantasy numbers. He might not be anything more than a RB2 or flex play, but adding Allen is a must this week.