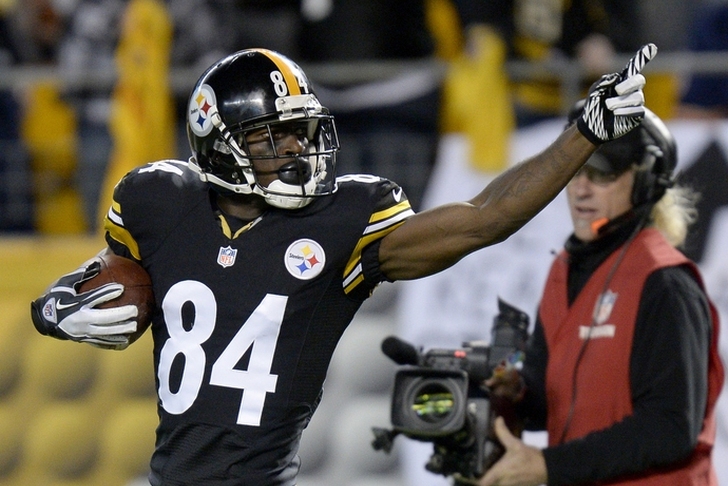 It's a passing league, which means there are plenty of talented WRs. This year's crop has both top-end talent and depth.

Before the rankings, some housekeeping notes.

Brown was the No. 1 WR last season and might repeat this year.

With the threat of a holdout over, expect another big year from Bryant.

When healthy, Jones is a consistent Top 10 fantasy WR. He's looked really good in the preseason.

With Julius Thomas gone, Demaryius Thomas might get a few more targets.

Cobb gets a boost with Nelson out for the season.

Johnson was banged up for much of last season, but he's still Megatron.

Hilton has established himself as Luck's top target.

Marshall is gone, leaving Jeffery as the main target.

Cooks has looked incredible in the preseason. He seems primed for a massive season.

Hopkins finished 15th last season. He's got WR1 potential if he can get some consistent QB play.

Sanders had a monster year, finishing 7th. He might not reach those heights again, but he's worth plugging in as a WR2. He's fighting a hamstring issue, but should be back by Week 1.

Watkins was 25th among WRs last year. He just needs some help from whoever his QB is.

With Maclin in KC, Matthews should be the No. 1 target.

With Jordy Nelson out for the season, Adams is expected to have a big season. He could be a very good WR2.

Allen hit a bit of a sophomore slump, but he should be Rivers' top target this season. He could make for a good buy-low candidate.

A PPR machine, Edelman still finished 27th in standard leagues. He could be even better this year.

Jackson had a down year, but perhaps getting some better QB play will boost his value.

Johnson was 41st last year among WRs, but playing with Andrew Luck could boost his value.

Maclin had a monster year. But, he's gone from Philly to KC and has constantly battled injuries.

With Wallace gone, Landry should see a substantial jump in production.

A big-play threat, Jackson's lack of consistency limits him to a high-end flex play.

Wallace can put up big numbers, but is inconsistent. He finished 18th last year and could finish roughly the same.

Tate was a WR1 when Johnson was out. But, with Johnson back, Tate is a flex or backup.

I like Agholor, but he's in his first year. He could have a big year in the second half of the season.

Robinson has potential, but it's best to take a wait-and-see approach.

Johnson showed potential at times last year. He's worth a taking a shot on.

White is aging, but is still serviceable.

Still a bit too inconsistent, but he's a good backup.

Smith relies on deep balls to be an effective fantasy player. Going from Flacco to Kaepernick is a downgrade in that department.

Hasn't quite put it all together, and will need time to develop chemistry with Mariota.

Johnson struggled in San Fran, but should get more targets in San Diego.

He finished 46th last year and his stock is trending upward. He could have a big year.

Royal had a Top 30 year in San Diego, but I doubt he produces a similar season in Chicago.

The No. 2 WR in Dallas, Williams is best left as a backup until he develops more consistency.

It was Wheaton, not Bryant who most expected to have a breakout season last year. Wheaton should play out of the slot this year, which could bump his PPR value. With Martavis Bryant out for the first four games, Wheaton gets a boost.

Bryant had some monster games last year, but was wildly inconsistent. His suspension hurts his value.

Fitzgerald had a terrible fantasy year last season, but he could bounce back.

Smith produced a Top 20 year last season, but he's not getting any younger.

Colston's on the decline.

Garcon had a poor year, but some steady QB play could make him a flex player.

Boldin managed to put together a Top 25 season, but he doesn't have much left.

Cruz was a Top 25 player this time last season, but an injury and the emergence of Odell Beckham drives down his value.

Harvin can't stay healthy and his no help from Buffalo's QB situation.

Stills is now in Miami, but probably won't produce a Top 40 season like last year.

Someone is going to catch passes in St. Louis. In theory.

I doubt he plays like a Top 25 wide out again, but he's worth having as a backup. He's currently injured.

Parker has potential, but be cautious with the rookie.

Moncrief might end up being a heck of a fantasy player, but Andre Johnson should hold him off for at least another year.

He should take the No. 2 WR role in Cincy away from Sanu.

With Cruz back, Randle's stock goes down.

Maybe not this year, but Latimer will be a serviceable fantasy player in time.

Perriman is Torrey Smith's replacement, but he'll need some time.

The loss of Kelvin Benjamin means Brown should be the Panthers' top wide out. However, Brown isn't that good.

Either Janis or rookie Ty Montgomery will be the Packers' new No. 3 WR. Janis is the favorite, but he's only worth taking late in drafts.

Allen should bounce back and with Johnson now in town, Floyd's value drops.

He could be good, but Lee is still a year or two away.

Maybe Crabtree can stay healthy and finally put together a decent fantasy season.

Austin hasn't proven himself worthy of the high draft pick the Rams spent on him. A lot of that has been St. Louis' inability to use him properly.

Someone has to catch passes in Cleveland.

Britt was 51st among WRs last year, but might not see as many targets.

Jennings put together a Top 40 season last year, but won't get as many targets in Miami.

Beasley has some good PPR potential, but isn't worth much in standard leagues.

Wright could replace Patterson on the depth chart. One of them could have a decent season.

Strong will be the No. 2 WR in Houston in time, but needs some development.

Patterson did not have the breakout season some thought he would. I swear I didn't spend a mid-round pick on him last year.

With Kevin White out for at least the first six weeks and possibly the whole season, Wilson now has some sleeper potential. He's got some talent, but might be best left on the waiver wire in most leagues.

Maybe Coleman can bring some value with Colston declining and Stills in Miami. Monitor him on the waiver wire.

Cooper will occasionally put together the big game.