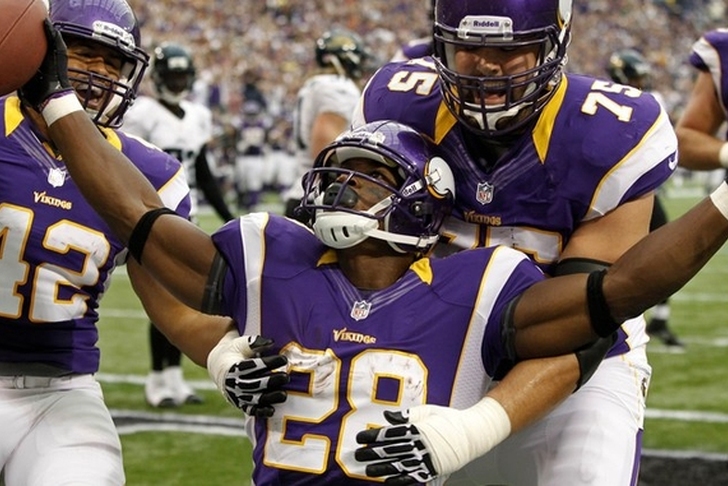 The start of the Fantasy Football season will be here before you know it. Which means it's time to start preparing for your draft. No one has ever won a league during the draft, but plenty have lost their league. Al King and I are here to help make sure the latter doesn't happen It's a passing league, which means it's harder to find top-end fantasy running backs. There is more promise than last year, but you should still load up on them early and often. Before the rankings, some housekeeping notes.

Al King's running back rankings can be found here.

Peterson played in just one game last year, but I expect to rebound with a massive season.

Lacy had a great season last year and that shouldn't change. There also isn't any real injury risk.

The Chiefs' offense runs through Charles.

Bell was second among RBs last year. I think he drops just a bit, but he's well worth an early pick. His suspension knocks down his value.

Not many knew who Anderson was before last year, but they should now.

I don't think Forte catches as many passes, but he's still a Top 10 RB.

Hill didn't start the year as a starter, but he finished as a Top 10 RB.

McCoy didn't score much last season, which hurt his production. He might score more this season, but heading to Buffalo will hurt his numbers.

Regression is all but assured after Murray's career year. He's never been healthy before last year and his offensive line won't be as good in Philly as it was in Dallas.

Miller might not produce another Top 10 season, but he's worth drafting as an RB2.

Don't expect Forsett to be a Top eight back this year, but he's still worth plugging in as an RB2.

Don't be surprised if he out-produces Frank Gore.

Gore is aging, but it's worth seeing if he can keep it going in Indy.

If the Saints do run the ball more, Ingram should get most of the work. There is some risk though, as Ingram has been hurt and ineffective in the past.

Gordon has a better supporting cast than Gurley.

Stewart was 23rd among RBs last season and now DeAngelo Williams is gone. He's a sleeper this season.

If he can stay healthy, Jennings could be a high-end RB2.

I like Ellington, but he's a bit too small to handle a full workload. He's a flex this year. The addition of Chris Johnson doesn't worry me.

It looks like he'll be the starter, but I don't trust him or the Jags offense 100 percent.

No Murray means Randle could have a breakout season. I suspect he'll be the starter.

Bell was 14th last season, but I expect him to produce more like a high-end flex this year. There are rumblings he's not in great shape, which worries me.

Martin had a down year last season, but has looked sharp in the preseason.

Crowell is one of several good backs in Cleveland who will all eat into each other's touches.

He's talented, but he's got to find a way to take carries away from Bell.

Ivory was 19th among RBs last year, but I doubt he produces like that again.

He's just a rookie, but he'll try to win the starting job.

Gurley is the better runner, but he's had injury problems his whole college career. His O-line is also a work in progress. I'm not sure he is the Week 1 starter.

Vereen and Ridley are gone, which could mean bigger numbers for Blount. But, Belichick tends to share the ball in weird and unexpected ways.

Despite falling behind Hill on the depth chart, Bernard was 18th among fantasy RBs. He gets a bump in PPR.

He's constantly injured and now plays in the most injury-prone backfield in the NFL. Draft him as a backup, especially if you take Murray.

A second round pick last year, Sankey never got going. Maybe that changes this year. He's worth a flier and has looked decent in the preseason.

He's great for PPR leagues, but just doesn't have enough carries to justify anything more than a flex play.

Freeman is competing with Coleman. They might end up sharing touches early on in the season.

With Foster's injury, Blue's value skyrockets. Still, he's no lock to be the starter.

He'll pretty much replace Reggie Bush. If he can stay healthy, he could take away some carries from Mark Ingram. He could be a nice PPR play.

If McFadden can stay healthy, maybe he can show why he was a high draft pick. Hopefully either Randle or McFadden gets the bulk of the carries.

He's just a rookie, but Johnson has the ability to earn carries in Cleveland's backfield.

Mason was 25th in RB fantasy points last season, but the Rams drafted Gurley to replace him.

Sims will try to wrestle away Martin's starting job.

Williams is the backup to Bell, but should get at least a few touches per game. If you take Bell, grabbing Williams for the first few games is a must.

Filled in well for an injured Rashad Jennings, but it's Jennings' job to lose.

West split carries with Crowell last year and now Duke Johnson is in the mix.

Foster might be back by Week 4. He's worth a late-round pick.

Essentially redshirted last season. Belichick could find ways to give him carries.

Hillman has looked good this preseason, but Anderson is still the starter.

Has shown flashes as Charles' backup, but only has value if Charles is hurt.

Robinson flashed some potential, but the Jaguars spent a high pick on Yeldon.

He's not well-known, but should be Forsett's backup.

Could be the big back that Arizona pairs with Ellington.

Asiata had a great year last year, but Peterson is back now. He should still be the backup though.

He's constantly injured and will be limited to third down duties. Has some upside in PPR.

The rookie is behind Sankey, but could get a shot.

If Ingram goes down, Robinson could get the call.

If Gore is out of gas, Herron will become the starter.

Played better than Reggie Bush did last year, but Riddick is best in a PPR format.

Ball looks like the third back this season for Denver.

Jones is a bruiser and there is a he might vulture a few TDs from Morris.

Will need to find a way to cut into Miller's carries to have value.

Cadet could be Shane Vereen's PPR replacement in New England.

Somehow, he finished 38th among RBs last season. More of a third down back.

Let's see how he does outside of New England.

Eddie Lacy's backup. Isn't worth much.

This might be Richardson's last chance. I'm not optimistic.

He finished 29th last season, but Gordon is the feature back now.

If something happens to Lynch, Turbin might get the call.

Turbin and Michael will be the ones competing to backup Lynch.

Brown struggled last year and now has to deal with Melvin Gordon.

Stacy forced his way out of St. Louis, but playing in New York likely won't be a boon for his fantasy stock.

Bradshaw might have some fantasy value if he lands with a team.

If he signs somewhere, he could be a decent PPR option.

Will compete with Ajayi for backup duties.

It appears he's still third on the depth chart in Minnesota.

Gerhart is now third on the depth chart in Jacksonville.