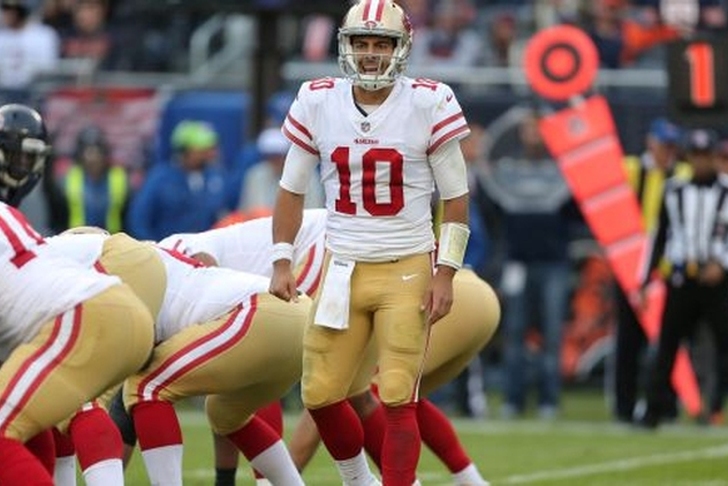 QB:
Jimmy Garoppolo- 5,500 (@ Houston)
Following an impressive performance in Chicago, Garoppolo seems poised for a breakout fantasy game. With that in mind, there are few matchups that would be better than the one he has this week, going up against a burnable Houston Texans secondary. Garoppolo, listed at only $5,500 will give you affordability to go bigger at other positions, while still possibly getting a top finishing quarterback.

RB:
Jordan Howard 5,400 (@ Bengals)
Howard has been in quite the funk the past two weeks, averaging a mere 4.1 points. However, with the banged up Bengals defense in town coming off a short week’s rest, this could be his comeback game. The Bears offense has scored a combined 17 points their last two losses, and a potential solution is pounding Howard the rock. Howard’s carry total in the last two games, 13 and 7, are his lowest since week 2. If the carries come, which I believe they will, then Howard at only $5,400 is a money-maker value in itself.

WR:
Trent Taylor 3,300 (@ Houston)
When asked about Taylor in last week’s press conference, Garoppolo compared him to a former teammate, Julian Edelman. Not a bad comparison after only playing one game together. In Garoppolo’s debut, rookie Trent Taylor set career highs across the board: 6 catches and 92 yards. This week he’s going up against an easier opponent in the Houston Texans. Jimmy’s other main target, Marquise Goodwin is strictly a deep threat wide receiver and is an additional $1,800. Furthermore, at only $3,300 Trent Taylor is a bargain, while nearly duplicating Goodwin in yards and catches last week.

TE:
Cam Brate 4,100 (Lions)
At only $4,100, Cam Brate is a huge bargain against a leaky Detroit Lions defense, one especially bad against tight ends, allowing touchdowns to them in their previous three matchups. Brate is a different player with Jameis Winston at the helm, averaging 12.1 points with him under center and 1.4 without him. At such a small price, Brate seems like a no-brainer.