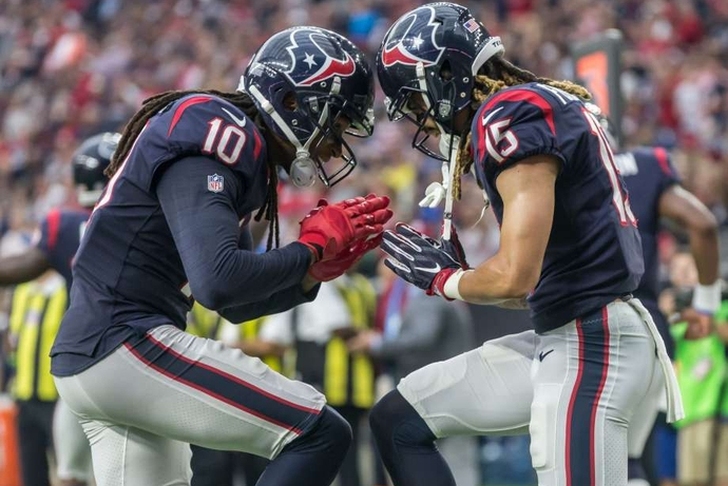 If somehow you didn't know Deshaun Watson more than likely tore his ACL at practice today then you desperately need to download the Chat Sports App and turn your notifications on to get all  NFL breaking news or throw me a follow on Twitter @MitchellRenz365.

Who will be the biggest loser in fantasy football on the Houston Texans from the Deshaun Watson injury?

Biggest Loser in #FantasyFootball from the Deshaun Watson injury?

DeAndre Hopkins Fantasy Value
Hopkins has been a monster this year with 45 receptions, 606 receiving yards, and seven touchdowns. He currently has the second most fantasy points among wide receivers and that will definitely drop. Last season Hopkins was wide receiver 36, failed to get over 1,000 receiving yards and only four touchdowns. Hopkins has been great this year but I don't think he is a WR1 without Watson.

Will Fuller Fantasy Value
Will Fuller has 13 catches and seven touchdowns. That is not sustainable, and now even less of a chance without Watson. This season Fuller is averaging 21.5 yards per catch, last season obviously without Watson he averaged only 13.5 and managed to score only two touchdowns. Fuller is a flex play for me going forward.

You May Also Like:  BREAKING: Texans Fear QB Deshaun Watson Suffered Torn ACL In Practice, Could Miss Rest Of Season

Lamar Miller Fantasy Value
Miller is impacted a little differently than the two wide receivers above. I think Miller isn't a top 15 running back going forward but he will get more work going forward. I expect the Texans to lean on Miller a little more going forward. But with their offense taking a huge hit he will have fewer chances to score.

If you want to hear more about the Deshaun Watson injury and how it impacts fantasy football then you need to watch The Fantasy Football Rumors Podcast where Tom Downey and Mitchell Renz break down the entire implications of the injury.