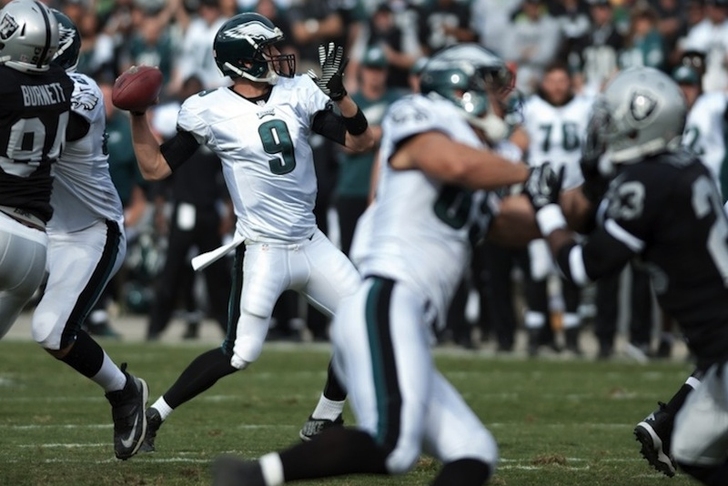 Week 9 has come and gone and left us with some injuries to deal with. Aaron Rodgers is week-to-week with a broken collarbone and Darren McFadden is out again with a pulled hamstring, leaving some of you with major holes in your lineup. Here are the guys you can plug into your team to make sure you come away with a win.

The Eagles had their highest offensive output of the season against the Raiders, scoring 49 points. Foles completed 22-of-28 passes for 406 yards and a career-high seven touchdowns, tying the NFL record for most touchdowns in a game. Foles did it all in only three quarters of action. He’s a great bye-week QB with tremendous upside in the Eagles’ up-tempo offense.

Darren McFadden re-injured his hamstring against the Eagles this past Sunday, and unfortunately it was the same one that kept him from playing in Week 5. Jennings took over for McFadden in the second quarter and rushed for 102 yards and a touchdown, and caught seven passes for 74 yards. Jennings should start this week and should get at least 20 touches - possibly more with Terrelle Pryor also nursing an injury.

James had a breakout game against the Seahawks, rushing for 158 yards on 28 carries. It was a big improvement from James’ first career start, where he rushed for only 39 yards on 10 carries. James is now going to face the Dolphins 21st-ranked rushing defense,

making him a high-end flex play. He should be owned in all leagues.

In Ivory’s past three games, he’s rushed for 104, 11 and 139 yards. He had 11 yards in the game against the Bengals where the Jets where outscored 49 to 9 and had to abandon the run early. The Jets are on a bye this week, but Ivory is good enough to be owned in all leagues.

In the three games Nick Foles has started, Cooper has averaged five catches for over 115 yards and scored four times. Meanwhile, DeSean Jackson has averaged 4.6 catches for

over 78 yards a game. Cooper is Nick Foles’ number one target at the moment, making him a WR3/4 against the Packers.

In Dobson’s past two games, he’s had nine catches for 190 yards and three touchdowns. He’s surpassed Kenbrell Thompkins and has started to show flashes of what made him a second-round pick in this year’s draft. The Patriots are on a bye this week, but Dobson should be picked up this week and stashed on the bench as a WR4/5.

Last week, I had Wright as a sleeper pick, and he proceeded to catch 4 passes for 58 yards and a touchdown. Wright has been Mike Glennon’s second option in Tampa Bay’s passing game, and has a great matchup this week against a Dolphins team that has allowed six touchdowns on the season to tight ends.