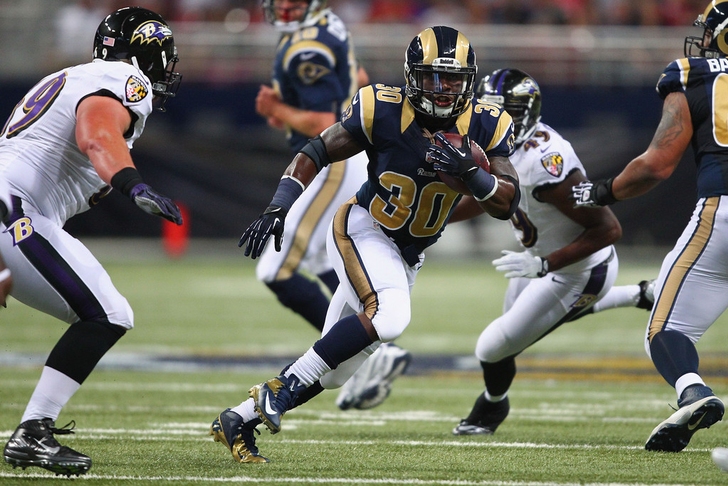 Welcome to Week 12, Chat Sports! We're covering who to start and who to sit in your fantasy league this week. We're always looking for the not-so-obvious guys you can sneak into your lineup who can give you the edge you're looking for.

Last week was a mixed bag, and only one of our starts put up huge numbers. Jordan Reed got concussed, and Case Keenum was pulled after the Raiders defense teed off on him. If you took my advise on the Stash 'Em, that means you acquired Bobby Rainey, who exploded last week for 164 yards and two touchdowns. Rainey will be a safe start this week as a RB2.

Week 12 brings us to our final games of the regular season for fantasy football. Depending on your whether four or six teams make the playoffs in your league, these are our last 2-3 games. Every win matters, and so do the points scored. Make sure you get the best players with the most favorable matchups into your lineup. Be mindful of the shut down corners - i.e. Joe Haden, who completely shut down AJ Green last week - and run-stuffing defenses like the Jets'.

If you consistently play the safest players - guys who reliably produce and aren't going up against top defenses - you're going to win more than you lose. Seeing that we're all here to win, here are the guys that should be solid bets this week.

Zac Stacy, STL RB: Stacy has been a solid fantasy back since being named the starter in St. Louis. This week, Stacy has a fantastic matchup - the Bears. Chicago is the 2nd-worst run stopping team in the league, giving up an average of 133.9 ypg. With Kellen Clemens under center, look for the Rams to consistently feed Stacy the ball, and end up with double-digit fantasy points to show for it.

Rashad Jennings, OAK RB: Jennings has been a dominant RB pickup off the waiver wire. Even when Run DMC returns from injury, Jennings will still get his touches. This week, he faces a Titans defense giving up the third-most fantasy points to opposing runners (24.9 ppg) over the last four weeks.

Kendall Wright, TEN WR: Last week, I was asked by a reader if they should start Dobson or Wright, and I stupidly picked Dobson. Wright has been a very solid ppr WR this year, and faces a horrible Raiders pass defense. The Raiders have given up the third-most fantasy points to wideouts this year at home, with opposing WRs averaging 30 ppg.

Hakeem Nicks, NYG WR: Nicks has been up and down all year, but this week he faces the team with the worst secondary in the NFL, the Dallas Cowboys. America's team is giving up a league-worst 313 ypg to receivers. Nicks put up 5 catches for 114 yards in their first matchup this year, and should put up double digits again on Sunday.

Coby Fleener, IND TE: Fleener has been a solid tight end start since Reggie Wayne went down. This week, he'll face an Arizona defense that has allowed the most receiving yards, the most touchdowns and the most fantasy points to tight ends this year.

Steven Jackson, ATL RB: The Falcons have been a disaster this year, and S Jax has followed suit. Everything about Atlanta's offense has been a mess. This week, Jackson faces a tough Saints defense with an even tougher offense. Atlanta should be playing from behind the entire game, which won't give Jackson a lot of opportunities to run. Jackson hasn't topped a 100 yards in any game this year, and don't expect that to change on Sunday.

Lamar Miller, MIA RB: The last two weeks have been abysmal for Miller, and he's put up 19 rushing yards and 29 receiving yards total. This week won't be any better for Miller, who faces Carolina's stout run defense. Carolina has the third-best run defense in the NFL, giving up only 84.5 ypg.

Ray Rice, BAL RB: Rice had his best game of the year last week, rushing for 131 yards and a score. It was Rice's first game with over 100 yards all year, so why sit him this week? On Sunday, he faces the number one overall run defense in the New York Jets. No team is giving up fewer fantasy points to backs this year.

Antonio Brown, PIT WR: Brown has been a top-seven fantasy receiver this year in all formats, but faces a tough matchup this week in Cleveland's Joe Haden. AJ Green had a mere two catches for seven yards last week with Haden marking him. It's hard to bench a guy like Brown, but don't have high hopes for him this week.

Mike Wallace, MIA WR: Wallace has had a bad year in Miami, only topping 100 yards twice and getting held to under 50 yards six times. This week, he faces an extremely tough Panthers defense. On the road, Carolina has given up the second-fewest fantasy points to wideouts this year.

Rishard Matthews, MIA WR: Matthews will be able to help a PPR team if they desperately need a WR. He should average five catches for the remainder of the year, with an occasional score.