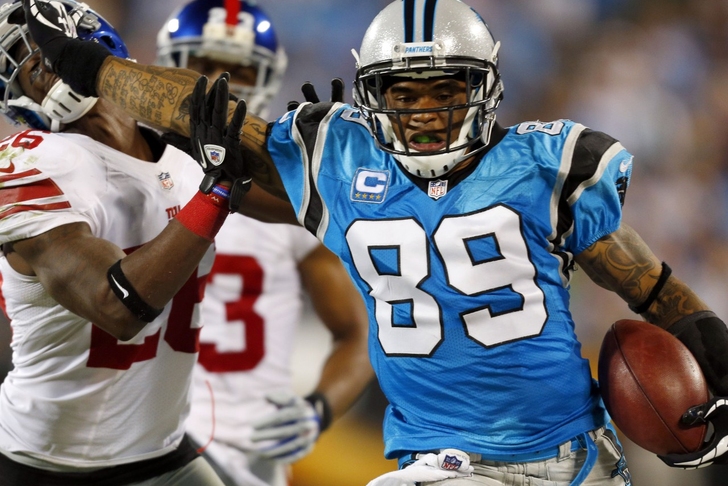 Many teams are on bye this week, so be sure to adjust your lineup to remove all Chicago Bears, Tennessee Titans, Indianapolis Colts, San Diego Chargers, Baltimore Ravens and Houston Texans players from your lineup. Don’t be that guy who doesn’t adjust his lineup.

The following is a Start ‘em-Sit ‘em list for Week 8. This is just a guide and shouldn’t be taken as gospel. Trust yourself and don’t be a rankings slave.

These rankings assume a standard ESPN 10-team fantasy league; 1 quarterback, 2 running backs, 2 wide receivers, 1 tight end, 1 Flex, 1 Defense. If I missed a player or you have a question, sound off in the comments.

These should all be obvious starts, even if everyone but Smith and Jackson are a low-end plays this week. The Panthers are actually fourth among fantasy defenses in standard ESPN leagues, yet are owned in less than 60 percent of leagues. They’ve also got a good matchup against the Bucs.

If you are desperate, you could play LaFell or James, but you might be able to find better options. The rest of these guys should rarely be played, if ever.

Williams has looked great recently, and can be a low-end play going forward. Randle isn’t normally worth a start, but with so many teams on bye, you can play him this week. The rest are obvious starts.

Since both teams struggle stopping the pass and have prolific offenses, avoid both defenses. Fauria, Bell and Durham aren’t reliable enough to start.

These are obvious starts; if you have them, you’re playing them.

These are obvious sits. Bowe is in the running for most disappointing mid-round fantasy pick.

Miller and Clay are risky plays, but in week with teams on bye, you might not have any better options. Edleman is one of Brady’s favorite targets, and Gronk is finally back! Ridley, Wallace and the Patriots D are usually safe bets.

These are obvious sits except for Brady, who has struggled in recent weeks. If you have a better option this week, don’t be afraid to sit him; he just hasn’t looked like his usual self lately. Dobson is one of my deep sleepers this week. If you’re truly desperate, you might be able to play him, but it’s very risky.

These are all obvious starts; even with the Bills, start Thad Lewis.

You could get away with starting Thomas if you have to. The same goes for Spiller, but I’m done with him. Until he proves something, I’m not recommending him anymore. He’s not healthy and he’s averaged less than six points per game this season.

Excluding Randle, these should be obvious starts. Randle has played well lately, and he gets a good matchup against the poor Eagles defense.

I’m not trusting Vick until he proves he’s fully healthy. The rest should be obvious sits.

Given the matchup, these are all obvious starts. Kaepernick should have a nice day against the awful Jaguars. Blackmon and Shorts can both be started as long as Chad Henne is not the quarterback. And the 49ers defense is 11th in fantasy points allowed to running backs, so you can play MJD if you have a starter or two on bye.

All potential 49er players can be started, and the Jaguars D can never be started.

Bernard and Green are obvious plays. Ivory got the majority of the touches last week, and can be played since so many teams are on bye. Both defenses can be started, but they are low-end plays. Kerley has played well lately, and the Bengals will be without Leon Hall.

These are obvious sits. Despite Dalton’s recent performances, you should still not start him.

Bell, Brown and McFadden are quality starts this week. The Steelers D has picked up its play recently, and they are a low-end play.

Pryor, Moore and Miller tempted me as starts, but I think there are better plays out there this week. The rest are obvious sits.

This should be a high-scoring affair, as both defenses are not very good. Reed has burst onto the scene and is worth at least a pick-up, if not a start. Helu is in the same category. I’m going to toot my own horn, but last week I mentioned him as someone to watch out for.

These are all obvious sits, especially since Ball didn’t get a carry last week and Hillman had a costly fumble.

These are obvious starts, except for Jackson. If he plays, I think he’s worth a start. If he doesn’t Jaquizz Rodgers should replace him.

These are obvious sits, except for Rodgers and Ellington. Rodgers was mentioned above, and I’m still waiting for Ellington to take over as the lead back in Arizona.

Finley has another concussion, while Rudolph and Jennings don’t the consistent quarterback play they need.

These are obvious starts this week.

The Rams are going to have to start Kellen Clemens, so avoid all of their players. Harvin may be this week. If he were not playing on Monday night, I’d have him as a starter this week. But if he can’t go, you’ll be hard pressed to find a suitable sub. Sit him this week, but grab him if you still can.