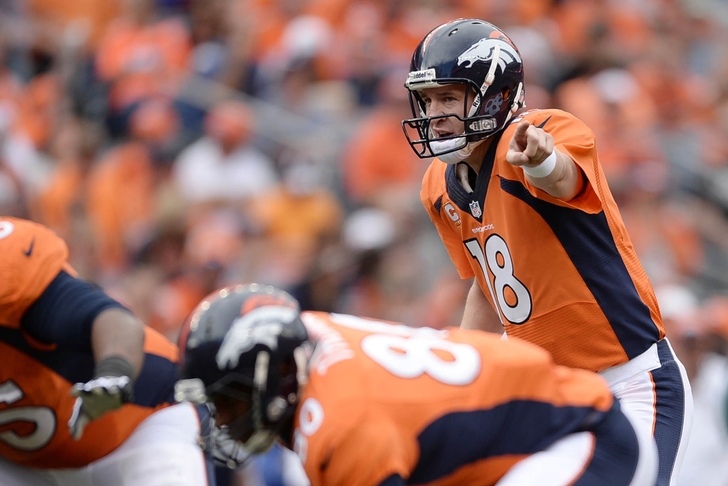 The fantasy playoffs are in full swing. Some are fighting for their league’s version of “The Shiva” while others are hoping to avoid the dreaded “Sacko.” If you’re looking for some help to capture that league championship, use my Start ‘em or Sit ‘em list.

This should be a high-scoring Thursday night game, so all of these guys are a worth start.

Welker is out with a concussion, so you can’t play him. Owners of the other Denver weapons should be pleased though. Green didn’t make a catch last week, so sit him.

MJD is battling a hamstring injury, so if he is healthy, he is a good play this week. If he is limited, sit him. Shorts is the only reliable receiving weapon on the Jags and he is a low-end play. The Bills running backs are both worth starting, and the Bills D has a great matchup this week.

These should be obvious sits. Johnson hasn’t been able to become anything more than a desperate flex player this year.

I said last week Cameron would have a bounce-back game and he did. The rest of these guys are an obvious start. If McCown were starting this week, I think he would be worth playing. I don’t trust Cutler, who is coming off an injury and hasn’t played as well as McCown did this year.

I mentioned Cutler above. Bennett isn’t a terrible play, but there are better options out there. The rest should be obvious sits.

Not much here this week in fantasy. Luck is a low-end play, while Tate is an average one and Johnson is a top-notch starter.

Hilton has struggled lately, as teams are focusing on stopping him with Reggie Wayne injured. Fleener is just outside the top-10 this week. The rest are obvious sits.

Edleman, Clay and the Dolphins D are low-end plays this week. Vereen is coming off a monster game, and will likely see even more action with Rob Gronkowski hurt. Hartline is becoming Ryan Tannehill’s favorite target, and is a sneaky low-end play.

Brady struggled early in the year without Gronk, and I expect that to happen again. Ridley has lost his job, while Amendola and Wallace have been ineffective for most of the year.

Assuming Adrian Peterson can’t play, these are obvious starts. Remember, Gerhart was a second round pick just a few years ago. Why the Vikings spent a second-rounder on the position when they already had Peterson is another question.

Patterson has shown plenty of flashes, but until he gets some consistent QB play, he’s not worth starting. The rest are obvious sits.

Brown has a tough matchup against the Seahawks, but is still worth a start. Wilson, Lynch and the Seahawks D are safe plays, and have great matchups.

Cruz is usually worth a start, but he’s got a tough matchup this week. The rest of these guys are desperation plays.

Gore, Davis, Jackson and the 49ers D are obvious starts. The Bucs D is a risky start, but there aren’t many great matchups this week and you could do a lot worse.

Kaepernick has been a disappointment this year, and I don’t trust Crabtree or Boldin fully yet. Glennon is a spot-starter in fantasy and doesn’t have a good matchup. Rainey has performed well against poor run defenses, and struggled against good ones. I think he struggles this week against the 49ers.

These are average to low-end plays this week. White has been getting a lot of targets lately and I feel comfortable recommending him now.

Without RGIII, I don’t think Reed is worth starting. Ryan has not looked like himself without Julio Jones and should be avoided.

The Jets are wildly inconsistent, and they’ve got a terrible matchup against the Panthers D. There isn’t a better defensive play than the Panthers this week. Olsen and Newton are safe starts, while Smith is the beneficiary of a great matchup.

Given the matchup, avoid all Jets players if possible. Williams hasn’t been as good as he was early in the year.

Charles and the Chiefs D are obvious starts. Jennings is risky for several reasons. He’s battling an injury and Darren McFadden and Marcel Reese are threatening to cut into his carries. I think he is worth the risk if you’re low on options. Aside from last week, when he didn’t need to throw the ball, Smith has played very well this season. I think that continues this week.

I refuse to trust Bowe. McFadden is battling his own injury and the emergence of Jennings. Sit him until he shows something.

Austin, Williams, and both defenses are obvious sits. I don’t trust Flynn, even against the Dallas D. If Aaron Rodgers returns this week, Jones, Boykin and Rodgers are worth a start. However, I don’t think Rodgers returns, so sit them.

Brees, Graham and the Saints D are high-end plays this week. Colston is coming off a massive game, and should be able to carry that over. Stacy has been the only Ram worth starting for awhile.

I don’t trust any of the Saints RBs right now, so sit them if you can. All Rams beside Stacy should sit on your bench.

Fitz, Floyd and the Cards D are safe starts this week. CJ0K is worth a start, but he’s a low-end play this week against a good Cardinals D. Although, he’s currently on this weird ‘big game every other week’ pattern and he didn’t put up big numbers last week. Walker is an underrated play this week, and is a good player to have if you put all your legs in the Gronk basket. The Cards give up more points to opposing TEs than any other team and Walker is owned in less than 20 percent of ESPN leagues.

These should be obvious sits. Wright struggled last week and Ellington and Mendenhall continue to split carries.

Both Bell and Bernard are RB2s at best this week. Green and Brown are safe plays, and the Bengals D is still worth starting, despite injuries.

These should all be obvious sits in a 10-team league. The law firm relies heavily on touchdowns to put up respectable fantasy numbers. You can probably play him, but I think there are safer options this week.

Rice has a bad matchup against a potent Lions run defense. Pitta can be played if you’re a desperate owner, but try to get Delanie Walker instead. The rest of these are obvious sits.