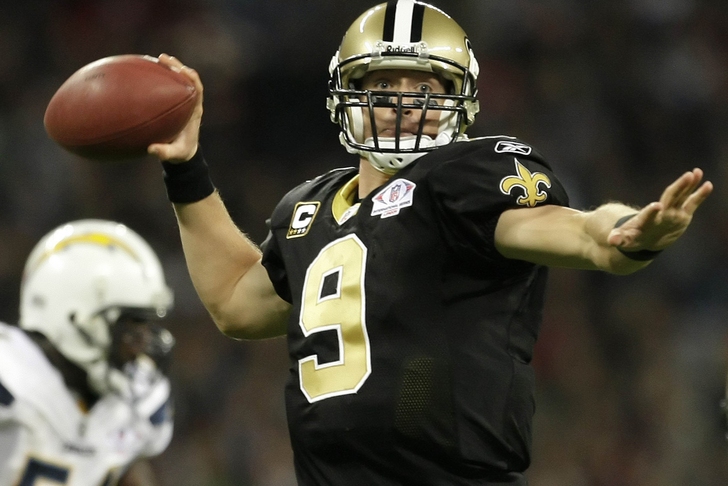 Four teams are on bye this week, so be sure to adjust your lineup to remove all Buffalo Bills, Cincinnati Bengals, Philadelphia Eagles and Seattle Seahawks players from your lineup. Don’t be that guy who doesn’t adjust his lineup.

This list is just a guide and shouldn’t be taken as gospel. Fantasy titles are won by trusting yourself and not being a rankings slave.

At this point in the season, these are all guys that should be playing for you just about every week. Douglas and Sproles are lower-end plays, but you can start them if you don’t have better options. The Saints D isn’t as good in fantasy as it is on the actual gridiron, but the Falcons present a good matchup.

Ryan, Jackson and White are probably guys that were drafted relatively high for their respective positions in your league, but they’ve have struggled for much of the season. White and Jackson have battled injuries and Ryan has struggled without White and Julio Jones. Sit them this week unless you have no other options.

Brown has a tough matchup against Joe Haden, but is still worth a start. Cameron has struggled lately, but is still getting a solid amount of targets. He should bounce back soon. Gordon, Bell and the Browns D are safe starts. The Steelers D is a low-end matchup play this week.

You can play might be able to play Roethlisberger this week if you’re dealing with injuries or byes, but he’s not a top-10 play. Ogbonnaya (or Yobogya! for those familiar with “The League”) falls just short of being worth a start. Still, you could do worse if you play him.

These are obvious starts except for Glennon. Glennon is right on the edge of being a top-10 play, but he is available in 97 percent of ESPN leagues. Since the team’s bye week, Glennon has put up an average of 18 points per game. If your QB is on bye, hurt or struggling; grab Glennon.

Yes, I am impressed by what Rainey has done, but remember who he played and who he has this week. The Dolphins and Falcons are the 25th and 30th ranked run defenses and the Lions are fifth. Sit him for this week and see if he has another nice game before giving him a start. The rest of these players are obvious sits.

These are safe starts, although Boykin and Jones are flex plays, at best, until Aaron Rodgers returns.

Rivers has a terrible matchup this week and shouldn’t be started. Grab Smith or Glennon for a week instead.

These are high-quality starts this week.

Austin had a big game before his bye, but he didn’t get many targets. He may just be a flash in the pan for fantasy this year. Keep him on your bench. Bennett is a top-15 play, but not top-10.

Newton, Williams, Olsen and the Panthers D are safe plays. Smith is viable flex option this week, even though he hasn’t had a monster game yet this year. The Dolphins don’t have any players worth a start in 10-team league. Lamar Miller is losing touches and has been ineffective while Mike Wallace hasn’t had double-digit points since Week 5.

As mentioned, avoid all Dolphins this week if you can. LaFell is only playable in very deep leagues.

Ivory is only a flex play this week, but you can start him. Smith is usually a safe play. Most defenses are matchup plays, and the Ravens have one of the best this week, going up against Geno Smith, who has 16 interceptions and just eight touchdown passes on the season.

Rice had his best game of the season last week, but he’s going up against a defense that has allowed the fewest points to fantasy running backs this season. Avoid playing him if you can. The rest of these players are obvious sits.

The Titans defense has struggled to stop fantasy running backs, and Jennings should get the majority of the carries this week. You can never really sit Johnson, because one week he’ll put up 20 points after putting up five the week before. You can’t risk missing out on those 20 unless you have solid options behind him.

Pryor won’t be getting the start and McFadden continues to deal with nagging injuries in classic McFadden fashion. Moore has not put up good number since the Raiders bye and you should have better options. Both defenses are just outside of top-10 play consideration.

Luck is having a nice fantasy season and Hilton can put up big fantasy numbers at any point. Fitzgerald is usually a safe play and Fleener is starting show some consistency. Ellington is a risky play, because he’s still not getting as many carries as he should. But his potential to go off means he is worth a flex play if you’re short on options. The Cardinals and their defense are sneaky good.

Richardson has done little since coming to Indy, despite what he says. The rest of these players are not worth starting except in deep leagues.

Two of the worst defenses in the NFL going up against each other? This has the potential to be fantasy field day. Any one of the guys could go for 20 plus points. Play these guys if you have them.

If Sean Lee wasn’t hurt, I’d consider putting the Dallas defense in the top-10, but they are not the same without him. Nicks is battling an injury and has not been as good as Randle lately anyway. Manning throws too many picks to start, even if though I expect the Dallas defense to struggle without Lee. Austin isn’t worth a start with the emergence of Williams.

These are obvious starts for the most part. Ridley’s status if always iffy with his fumbling issues and the return of Shane Veeren, but he has scored a TD in five straight games. Welker is battling a concussion, but he wants to get his revenge on the Patriots and Belichick badly. If he plays, I think he has a big game.

Vereen will be a start soon, but the Patriots appear to be easing him back. Stash him on your bench until then.

Assuming Reed is healthy, these are obvious starts. Kaepernick could be primed for a big game against a Redskins defense that hasn’t been very good this year.

RGIII hasn’t played that well this season, and has a tough matchup against the Redskins. Play Alex Smith or Mike Glennon instead.