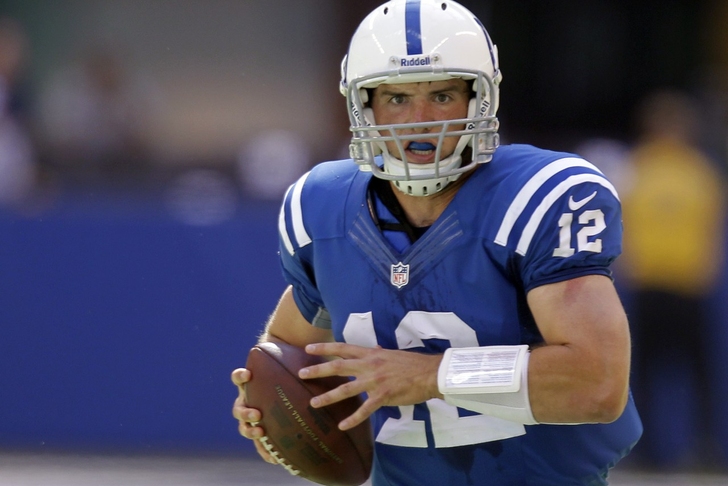 Just two teams are on bye this week, but be sure to adjust your lineup to remove all Dallas Cowboys and St. Louis Rams players from your lineup. Don’t be that guy who doesn’t adjust his lineup.

The following is a Start ‘em-Sit ‘em list for Week 11. This is just a guide and shouldn’t be taken as gospel. Trust yourself and don’t be a rankings slave.

These rankings assume a standard 10-team fantasy league; 1 quarterback, 2 running backs, 2 wide receivers, 1 tight end, 1 Flex, 1 Defense. If I missed a player or you have a question, sound off in the comments.

I’m a big Hilton fan, and think he’s a top-15 play this week. Luck is going up against a good Titans D, but Luck is due for a bounce-back week. Johnson is maddening, but if you have him you might have to play him. You can’t risk having him on your bench if he goes off.

Richardson has done nothing since coming over from Cleveland. Wright isn’t start-worthy in a 10-team league without Locker. Fleener just misses the cut, but can be played if you’re desperate or in a deep league.

Ivory and Jackson are the guys getting the majority of the work for a pair of teams that have two other running backs not worth starting this week.

Those two guys are Spiller and Powell. Spiller has been battling injuries while Powell is seeing his work reduced. Johnson isn’t worth playing in a 10-team league unless you’re really desperate.

Rice is a borderline play this week. If you can avoid playing him, don’t. He just hasn’t looked like the Ray Rice of old. Forte, Jeffery and Marshall are safe starts this week. Bennett is a low-end play, and he just sneaks in as a start.

Of these guys, McCown might be the most worthy of a start. But that’s only if you’re incredibly desperate. The rest should stay on your bench, or wavier wire.

Gordon, Cameron, Bernard and Green are worth starts every week. Both defenses are good and should put up solid fantasy numbers this week, especially since both QBs aren’t exactly world-beaters.

These are sits in a 10-team league. You might be able to start Dalton in a big league, but he’s come back down to earth after a few good weeks.

Durham is playable in PPR leagues, but not standard ones. You can get away with Sanders, Miller and maybe even Big Ben in deep leagues, but they should sit in 10-team leagues.

The Raiders D and Tate are low-end plays, but there better options. Tate is going to get his chance with Foster out for the year. Johnson is always a high-quality start.

You can start Pryor, Jennings and Moore in a 12-team league, but I’d sit them in 10-team if you can. Pryor hasn’t thrown a touchdown since week 6, making him a low-risk, limited reward play for now. Keenum is someone to monitor, but is not worth starting. Graham has actually put up worse numbers since Owen Daniels got hurt.

Fitzgerald is almost always worth a start. Shorts is the beneficiary of Justin Blackmon’s suspension and Ellington is finally overtaking Mendenhall as the lead back. The Cardinals D is sneaky good and has a great matchup this week.

MJD has put up solid fantasy numbers, but only when he scores a touchdown. His YPC is awful, and I don’t think he scores this week. Sit him if you can. The rest of these guys shouldn’t be started except for an emergency.

One of the few games this week that the matchup is great for both fantasy offenses. Foles has been on fire, and he has made Cooper a reliable fantasy play. Cooper isn’t getting a lot of targets, but he’s making the most of them. 54 fantasy points on just eight catches in the past two games. Griffin, Morris, Garcon, Reed, McCoy and Jackson could have huge games this week.

Don’t ever play these defenses, and Celek and Helu aren’t getting enough consistent looks to play.

Ryan has struggled lately, with just three touchdowns compared to seven picks in his last three games. But those were against good defenses, and the Buccaneers are not a good defense. He’s a low-end play in a 10-team league, but he did put up 22 points the last time he played the Buccaneers. Douglas is a low-end play as well, because his flight pattern might have to go over Revis Island. Gonzales and Jackson are obvious starts.

I don’t trust Jackson, even against the Bucs D, and the rest of these guys aren’t playable in a 10-team league.

The Dolphins are a mess right now, and Miller is barely worth a play. If you can sit him, do so. The Chargers players are usually safe bets and they are again this week.

The Dolphins offensive line is not in good shape, for obvious reasons, and Tannehill doesn’t have enough time to look downfield for Wallace. Sit Wallace if you can. Matthews needs to show he wasn’t just a flash in the pan and perform well for a few games to be worthy of a start. Hartline isn’t usually worth a start and Clay is just outside the top-10 TE list.

Brown is back and the Giants are going to use him a lot. Same goes for Lacy. Cruz and Nelson are usually safe starts and Boykin is still a low-end WR, even with the issues at quarterback. Don’t look now, but the Giants are averaging 15 fantasy points since Week 7, after putting up negative points in four of their first six games. No offense has given up more fantasy defense points than the Giants, so you can get away with playing the Packers, even though they are hurting.

Jones hasn’t looked good lately, and until he does, he should sit on your bench. Randle is putting up better number than Nicks the past few weeks, but both should sit in a 10-team league.

In a week where there aren’t a lot of good QB matchups, Wilson has the best one of all. He is a top-3 play this week. Peterson, Lynch and the Seahawks D are obvious starts. Harvin is a very risky play, but it looks like he’s finally healthy and playing against his old team. If you’re not in great shape at WR this week, I think he is worth the risk.

You can play Carlson if you have no other options, but none of these guys should play unless you are desperate.

Davis might miss the game because of a concussion, so be sure to monitor his status and have someone ready to go if he gets hurt. The rest of these guys are obvious starts, now that Colston seems to be getting healthy.

Oh Colin Kaepernick. One week he puts up 27 points, the next week just two. The Saints D isn’t a great matchup, so sit Kaepernick if you’re able to. You can get away with playing Thomas if you have to, but there are better options out there this week. The 49ers D is usually worth a start, but the Saints offense is just too good. Sit them, but you might not want to cut them.

These are all obvious starts. Charles and the Broncos starters on offense are always starters if you own them. The Chiefs D has been amazing in real life and in fantasy. Don’t bench them just because it is the Broncos. You can still play them because they are that good.

Not much to say here; these are obvious sits.

Tough matchup here for New England, but I think Brady deserves a start, albeit a low-end one, after what he did to the Steelers. Ridley, Amendola and Gronk are obvious starts. Newton is a middle-of-road start this week. Williams, Smith and Olsen are low-end plays, but you have to give them a chance. You can play both defenses as well, although they are a little risky this week.

The return of Shane Vereen is nearly upon us! If he is still available in your league, grab him right now. When he is back and getting the touches he got in the first game, he is going to be a weapon. Sit him for now, but he should become the perfect flex player for you.