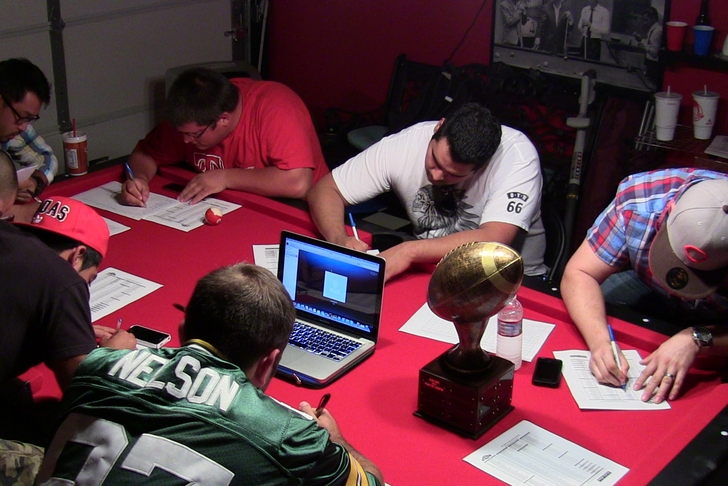 For many people fantasy football has become a year round affair, just ask well-known ESPN fantasy writer Matthew Berry, he had to quit covering fantasy baseball to focus solely on fantasy football. Hey, that's a job opening for someone like me. Anyway, I have been receiving text messages from people asking about fantasy football draft scenarios for about a month already now. I thought it was crazy but then I realized, man, August will be here before we know it. August is of course "National Fantasy Football Draft Month," declared by every fantasy football commissioner in the world.

As I'm writing this piece, I am also taking part in a Yahoo! mock draft. Don't judge me. I bet you are going to do a mock draft as soon as you are done reading this. But, what shocked me even more was the amount of people actually waiting for their mock drafts to start in the mock draft lobby. When I went there I didn't expect much and actually thought I was insane for even attempting a mock draft this early, then I realized there are many, many more just like me. That's when I concluded that America has officially gone crazy for fantasy football.

Whether you play for money, for bragging rights, in weekly contests or in all three; like myself, one thing is for sure. From August to late December is dominated by your fantasy football league(s) and the players on your team.

It begins with countless hours of studying depth charts, injuries, hype reports, and watching preseason games leading up to the draft. Buying every fantasy football magazine in the grocery store, possibly paying for the online draft guides, constantly tweeting the fantasy "experts" and asking them countless questions, creating your own rankings or cheat sheets, all this and more happen just leading up to the draft. The anticipation of finding out what pick you are; whether you decide it like this league, or like this league, or just draw names from a hat is an event all in itself.

Don't even get me started on draft day, if your involved in a league that does live drafts on location then you know how fun it can be. There isn't as much excitement with online drafts but still plenty of pressure with every pick. Everyone comes together on the same day (which can be a chore all in itself) to put together their best teams that they possibly can. There is plenty of heckling, laughing, applauding and general trash talk. Usually food and drinks are involved and the tradition has come so far that restaurants are even offering specials if you have your fantasy football draft there.

Great, now your team is drafted. Then you start looking at the players who went undrafted and can't believe your eyes "that guy's out there?!" You then go look at your roster, which you JUST drafted, and try to figure out who you can drop to pick up that mind boggling free-agent on the waiver wire. This is the stage where the insanity begins to set in.

Eventually, you think better of yourself and decide that it would be best to roll with the team you drafted. Then in two days you wake up and realize someone else picked up the player you wanted before week 1 even began! "I KNEW I SHOULD HAVE PICKED THAT GUY UP!" you scream. Then immediately you go to the message board and explain how you were going to pick that guy up but decided not to and congratulate the fantasy GM who did. This way you look like a genius as well if that player has a stellar start, and a genius if he doesn't. Covering all your bases, making everyone else wonder how you do it?

So as you watch week by week go by, and see three-quarters of your team get injured with either season ending or nagging injuries you begin to panic. You start throwing hundreds of trade offers out there, adding players to the trading block and making phone calls telling the other GM's why Sidney Rice is going to have the best second half of the season compared to all receivers; something you know is incredibly untrue. Then you hit the point where you will take any trade because your team is well below where you thought it would be. Next thing you know, you're sending Le'Veon Bell for Justin Blackmon (because you're stacked at running back of course) and get two games from Blackmon before he is suspended for the rest of the season! Are you kidding? Yes, I am speaking from experience but in my defense I also had Eddie Lacy and Jamaal Charles.

You somehow find yourself in the playoffs after your team was able to turn it around. You win the first round matchup as the underdog which brings your confidence way up; you start thinking, 'maybe I can win this thing.'

Then comes the championship game, either week 16 or 17 depending on your league. You are down by 5 points going into the final few minutes of the game and you have Frank Gore at the 5-yard line, needing just a rushing touchdown to take the lead and win the whole thing. You watch in anticipation, full of stress and excitement, your heart is pounding as Colin Kaepernick takes the snap and turns to give it to Gore. There it is, your rushing touchdown you need to win. WAIT! Kaepernick pulls the ball back in and rolls out to the left, you fall to your knees and start yelling "WHY!" as Kaepernick hits a wide open Vernon Davis in the back of the end-zone. That's it, the Niners never get the ball back and you lose the championship by five points, FIVE POINTS!

It's that almost winning that brings us back. The "there's always next year" American mantra that keeps you believing that next year is your year. The unfortunate breaks that happened to you this year that you know won't happen again next year.

Of course if you were the lucky one to win it all, then you are obviously going to come back to do it all again. You just had the best fantasy football season you could have and you are certain you will repeat that every year going forward.

The fact of the matter is, fantasy football is a large part of our lives and it will only continue to get bigger. From 2008 to 2012 the amount of money spent on fantasy football increased from $800 million to $1.67 billion dollars, a 48% increase according to the Fantasy Sports Trade Association (FSTA). Yes, that exists. According to FSTA there was 25.8 million fantasy football players in 2013 a number that is way up from the 2 million that was estimated in 2000. There was a phenomenon I noticed last year, where people that I know who hardly watch sports were participating in fantasy football and keeping up with it every week. It baffled me at some of the people who were playing and how well they were doing. These huge numbers are only expected to grow as current fantasy players continue to pass on their passion to anyone they can.

Fantasy football is only continuing to grow and is going absolutely nowhere as it has become "America's Newest Addiction." You see what I did there? That's right, that's the title of the article.