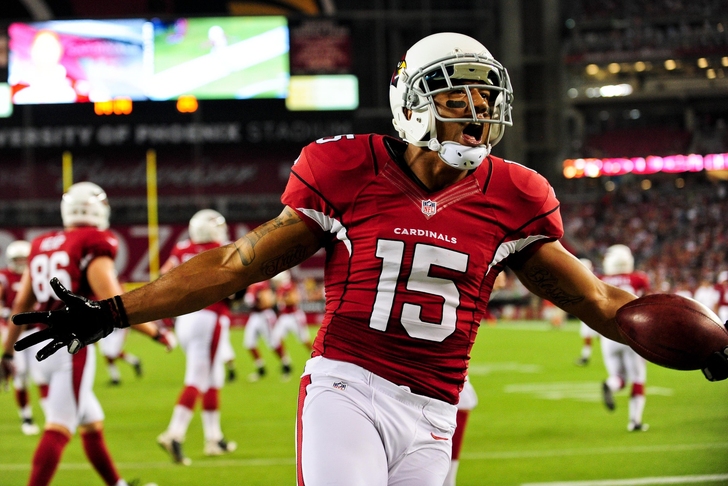 Floyd is going into his third season in the NFL, typically a year when talented wideouts have breakout seasons. Last year Floyd began to show why the Cardinals took him with the 13th overall selection in the 2012 draft. He possesses very strong hands and made some incredible catches look easy in 2013. Floyd finished second in targets on the team behind only Larry Fitzgerald.

Floyd's 65 receptions were up from his rookie year when he only had 45. He nearly doubled his yardage from 562 to 1,041 all while finding his role in the Cardinals offense. Andre Roberts is no longer there, likely giving Floyd even more targets this season. Even with Fitzgerald not being the same receiver that he was, defenses still need to show respect and pay attention to him. With opponents focusing on Fitzgerald, Floyd can find himself in beatable single coverages.

At this point Carson Palmer is not one of the top quarterbacks in the league but is still capable to get the ball to his talented receivers. With Fitzgerald taking on the opposing teams' top cornerback, Floyd will yet again present a big target for Palmer to find.

Opinion: The writing is on the wall for a very strong third-year campaign from Michael Floyd. In a Bruce Arians led offense and a more than capable quarterback at the helm, I expect Floyd to be one of the bigger breakouts of the 2014 season. Dare I say a top-15 WR?

Floyd is being drafted toward the end of the sixth round (10-team league) right after Desean Jackson and before guys like T.Y. Hilton, Jeremy Maclin and Torrey Smith. This seems to be a good spot for Floyd and is a safer bet than both Jackson and Hilton. For a guy you could get as possibly your WR3, the value on Floyd is tremendous.

Watch as Floyd refuses to go down for a 91-yard touchdown!

Agree or disagree? Let us know in the comments.