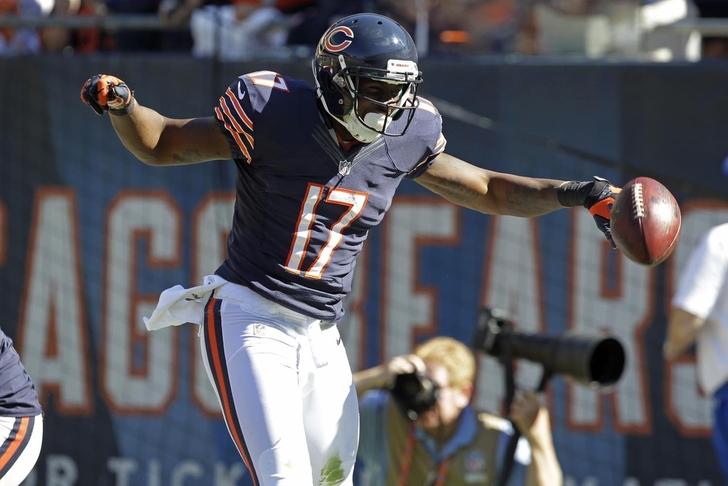 Alshon Jeffery came onto the scene in a big way in 2013. He showed us the ability to win a jump ball and separate himself from the secondary on deep routes. He looks the part of an elite wide-receiver, standing at 6-foot-3-inches with 4.48 forty speed. Jeffery lines up opposite of one of the leagues premier receivers in Brandon Marshall which allows him to take advantage of single coverage. All signs are pointing to another solid season.

The targets were there all last season for Jeffery as he had 150 in total, good enough for just over nine per game. He had double-digit targets in six of the 16 games with a high of 18. Those numbers do have a caveat though, the games when he was targeted the most came in those where Josh McCown started. Take a look at the break down of pass attempts and targets from each Bears' quarterbacks.

When you look at those numbers it is a bit shocking and only time will tell if that will occur again this season. However, from their time in Denver together Jay Cutler has force-fed the ball to Brandon Marshall. Even with Jeffery becoming a bonafide weapon, the Cutler-to-Marshall love affair will continue.

Opinion: In many mock drafts that I have done up to this point, I have seen Alshon Jeffery drafted as a WR1 for a lot of teams. The potential is there and I get it, I do. But, for me personally, I feel okay but not comfortable with Jeffery as my top wideout. I don't know about you but I don't want to feel just 'okay' with my WR1. Bottom line, Jeffery is a solid WR2 with WR1 potential.

His current ADP is ahead of Randall Cobb, Vincent Jackson, Pierre Garcon and Michael Crabtree. All guys I would personally take before him.

Still, it's pretty awesome he can do stuff like this!

Don't be shy, go ahead. Let us know how you feel in the comments. Put ya' name on it!