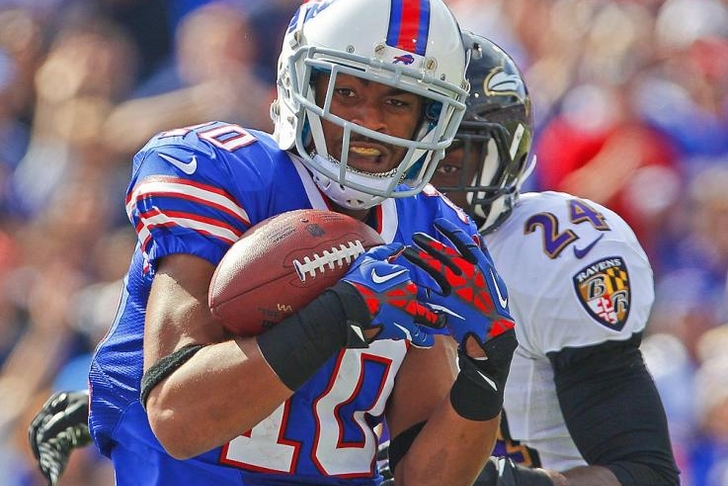 Welcome to week 5, Chat Sports! We’re covering who to start and who to sit - we’re always looking for the not-so-obvious guys to put in your line up who can give you that little edge you’re looking for.

Last week was rough on the starts with just Bilal Powell coming through, but again we’re always looking for guys flying under the radar. The sits, on the other hand, were a success! A lot of people questioned the CJ Spiller sit, and he didn’t disappoint by putting in a subpar performance.

Entering week 5 of the season, you should have a good idea of your team's strengths and weaknesses. If you’re below .500, now is the time to stop sitting on your hands and waiting for your team to turn around. Stop making excuses for why your team isn't winning, and start selling commodities to fill multiple holes on your team. The W’s need to start coming now, and some of these guys should be able to help you get them:

Robert Woods, BUF WR- I almost put him here last week, and now there’s no doubt. Coming off a stat line of 4/80/1, Woods was targeted more than fellow WR Stevie Johnson. In week three, Woods only had two catches for 35 yards, but was targeted ten times. It’s starting to look like EJ Manuel is looking for Woods on a consistent basis, and the two have developed a nice rapport. Going up against a Cleveland defense that should completely shut down Buffalo's banged up run game and with and Stevie Johnson facing a heavy dose of Joe Haden, Woods should have another game solid enough to help you get the W.

Terrance Williams, DAL WR- Williams' stat line of 7/71 was good for his first start of the year. The bad news was that he had a costly fumble at the goal line that could’ve helped him reach WR 2-level fantasy output. With Miles Austin nursing a bad hammy (which seems to be the case every year) I’m looking for Williams to rebound this week while Dallas plays catch-up to Peyton Manning and company. If Williams can hold onto the ball, he should be able to get you double digit fantasy points.

Rashad Jennings, OAK RB- Just like Austin's hammy, you can always count on Run DMC to get hurt. Jennings will get the nod at RB for OAK this week if McFadden can’t play, and he almost definitely won’t. With San Diego being soft versus the run and Pryor likely to run a bit less because of the concussion he suffered two weeks ago, Jennings should benefit with a RB 2 output day.

David Wilson, NYG RB- Wilson has been a huge disappointment so far this year. Most of you have probably traded him away or benched him. This is the week to get him back in your lineup. The release

of Da'Rel Scott should help Wilson, who's going up against a Philly defense ranked 26th against the run. The Giants are desperate for a win, and have to realize that it won't happen without establishing the run. Wilson should get the carries he needs this week and put up the numbers you thought he would when you drafted him.

Greg Olsen, CAR TE- Olsen is facing an Arizona defense that has allowed the second-most fantasy points to tight ends. Jimmy Graham and Jared Cook had field days in their games against the Cardinals, and I expect Olsen to pick up right where they left off. What helps Olsen's case even more is that he's already tied for the team lead in targets, so we know super Cam will definitely be looking his way.

Alshon Jeffery, CHI WR- Jeffery has improved week-in and week-out. He’s coming off of the best day of his pro career last week, where he put up a monster line of 5/107/1. New Orleans' defense is much improved from a year ago, but they do still have holes in their secondary. We also know that Jay Cutler is going to have to sling the ball around to keep up with Brees and his high-powered offense. I had Alshon in my lineup last week, and he remains there this week - you should follow suit.

Buffalo's run game- CJ Spiller finds his name here once again. In the beginning of the year, Spiller was going as high as number 3 in fantasy drafts. He's been a colossal bust so far this year, with only one solid week of production, and don’t look for him to play much (if at all) this week. With Fred Jackson looking likely to start with Spiller not practicing all week (and F JAX is a little banged up himself) don’t look for him to do you any favors versus Cleveland's dominant run defense.

Chris Johnson, TEN RB- I haven’t been a fan of this inconsistent RB in a long time. Don’t look for a turnaround game this week against a tough KC defense. Kansas City has been playing some excellent defense, and has only allowed one rushing TD on the year. These signs point to CJ coming up short this week, and you should find Johnson a warm, cozy spot on your bench.

Stevie Johnson, BUF WR- While Robert Woods is in our start column, Stevie is on the opposite end. Facing a lockdown corner like Joe Haden is never good for any receiver, and that's what Stevie is going up against. Johnson is banged up, and this week should be the week he gets a breather out of your line up.

Colin Kaepernick, SF QB- A lot of you drafted to Kap to be your star QB, and he has sorely disappointed so far. Last week he scored two touchdowns against a bad Rams team, but besides that he’s done nothing for you. This week, he faces a Houston defense that hasn't allowed a touchdown through the air in two weeks. Look for San Fran to rely on their strong running game this week, and for Kaepernick to frustrate you even more.

Benny Cunningham, STL RB- St Louis has no running game at the moment, and they find themselves in flux. It looks like they're going to give Cunningham and Zac Stacy a shot to see if they’re the solution to the problem. Between the two, I like Cunningham a little better than Stacy, and if you have room on your roster he’s worth a stash for a week or so just in case he comes away with the job.

For all of your fantasy questions answered, follow @DynastyRich