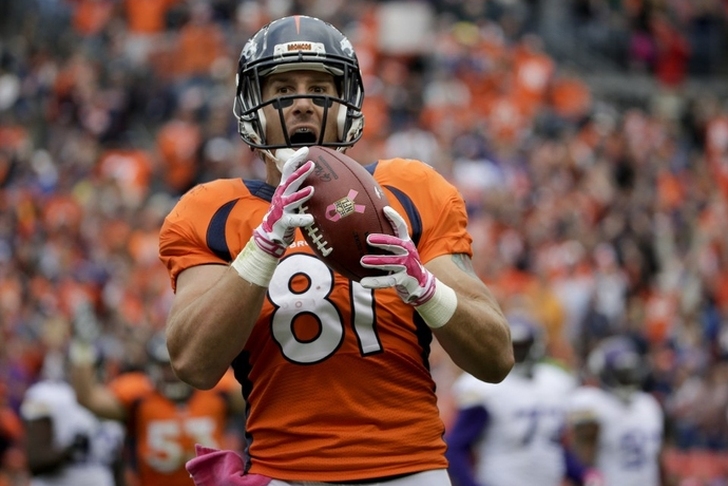 There are studs and duds every week in Fantasy Football. Usually, those studs are expected. Adrian Peterson and Tom Brady putting up a big game is expected. However, sometimes those big games come from players were didn't see coming. With that in mind, here are 6 Surprise Fantasy Football Stars From Week 9.

Beasley had put up 15 points all season, but exploded against the Eagles for 23 points. It was completely unexpected, especially for a slot receiver who is the third option on his team. He still has some value in deep PPR leagues, but this is a complete flash-in-the-pan performance from Beasley.

Walker hadn't topped 10 points this season, but had a monster game against the Saints. He racked up 23 fantasy points, tied for the most among TEs with Tyler Eifert. While Eifert had put up big games this season, Walker hadn't. That's what makes his effort so surprising.

Daniels came out of nowhere to produce his best fantasy game of the season. He caught six passes for 102 yards, both season-highs. He also added a TD to complete his 16-point fantasy game. It's tough to trust Daniels going forward given his poor play earlier this season and the presence of Vernon Davis on the team.

Williams playing well isn't surprising, as he was going to get nearly all the carries with Le'Veon Bell out. But Williams leading all scorers with 36 points is surprising. Williams racked up 170 yards and two scores on 27 carries. He might not match those numbers going forward, but Williams is still a strong RB2 every week.

Williams played well in lieu of LeSean McCoy earlier this year, but not much was expected when McCoy returned. Williams was battling his own injury issues and hadn't played in the Bills' previous three games. But, McCoy was injured against the Dolphins and Williams capitalized on the chance. He racked up 23 points, thanks in large part to two touchdowns. Only two running backs outscored Williams. McCoy should be back in time for the Bills' Thursday game, which means Williams has limited upside.

Cassel put up 22 fantasy points this weekend, which is incredible given that he put up only 14 combined in his first two starts. He was the sixth the leading fantasy QB, outscoring fantasy stars like Tom Brady. It was certainly surprising, but it's unlikely Cassel will continue to be a Top 10 fantasy QB. After all, he's only getting one more start before Tony Romo returns.