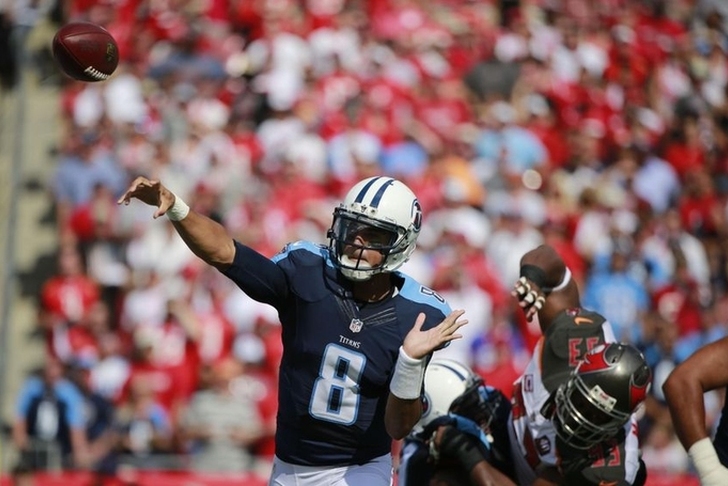 The only predictable thing about fantasy football is that it's unpredictable. Big name players lay eggs and players not on anyone's roster put together huge games. It happens each and every week. Here are the six most surprising fantasy football performances of Week 1.

Wow. I don't think even the biggest Mariota supporters expected this performance. Mariota was 13 of 16 for 209 yards and 4 TDs in his first regular season NFL game. The Titans' game plan was perfect. They utilized Mariota's unique talents in the perfect way with plenty of shotgun looks. It's an approach that the Redskins should have followed with RGIII and one the Buccaneers should follow with Jameis Winston. Mariota is owned in 35 percent of ESPN leagues, so you might still be able to get him on the waiver wire. Unless you have an elite QB like Aaron Rodgers, Mariota is worth picking up. Don't start him yet; it's best to make sure this wasn't a flash in the pan and that the Bucs defense isn't just that bad.

When a player owned in less than a half of a percent in ESPN leagues posts a Top 10 game at his position, it's always going to be worth mentioning. Still, there is no reason to add the Oakland Raiders RB. Reece caught only three passes for 26 yards, but two of those went for scores. He won't produce like that again this season. Don't chase those touchdowns and waste a roster spot on him.

I'm moderately concerned about the Broncos' running game. The ground attack, heck the whole offense, looked bad against the Ravens. We'll get to the pass game a bit later, but C.J. Anderson struggled. He picked up a meager 29 yards on 12 carries, although he did add four catches for 19 yards. Making matters worse was that backup Ronnie Hillman outplayed Anderson, picking up 41 yards on 12 carries. Hillman is owned in less than 50 percent of leagues, which is too low. If you drafted Anderson, you likely took him to be your No. 1 RB. There is no reason to panic with Anderson yet, but there is cause for concern.

If you had told me a Bills WR would catch five passes for 79 yards and a score, I would have bet a lot of money on it being Sammy Watkins. So yes, I am surprised Percy Harvin was the Bills' WR to step up. Harvin has never lived up to his potential, but maybe he finally will in Buffalo. He's owned in less than 50 percent of fantasy leagues, so he's worth taking a flier on and seeing if he can repeat this performance. Just don't risk starting him yet.

It was a rough opening week for several big-name WRs. Calvin Johnson put up only three. Brandin Cooks struggled against the Cardinals' pass defense, putting up only four. A.J. Green put up six and Odell Beckham put up only four. All four should bounce back in the coming weeks. Dez Bryant hardly played and will now miss 4-6 weeks with a broken foot. That hurts his value, but boosts Terrance Williams'. Demaryius Thomas and Emanuel Sanders each put up only six. With as bad as the Denver offense looked in Week 1, I'd be concerned about those two. I had Peyton Manning begged as a fantasy bust this season, but I was hoping Thomas and Sanders would still put up good numbers. Hopefully they rebound next week.

Rob Gronkowski and, to a lesser extent, Travis Kelce putting up big games is to be expected. It's impressive, but not surprising. But guys like Austin Seferian-Jenkins, Tyler Eifert and Darren Fells going off is surprising. Seferian-Jenkins put up 110 yards and two scores, although one of those came in garbage time after the Titans had stopped trying. Eifert racked up 104 yards and two scores, although he might not match those numbers again. Fells came out of nowhere, posting 82 yards and a score. I'll be honest; I thought it was Daniel, not Darren Fells at first. I don't think I was alone either, as Fells is owned in .1 percent of leagues. All three players are owned in less than 50 percent of leagues and are worth adding if you don't have a stud like Gronk on your team.