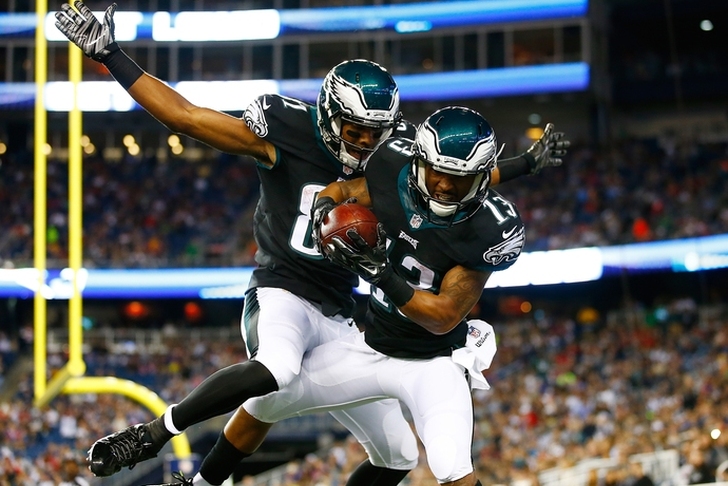 It’s Chip Kelly’s world and we’re just living in it. Whether or not things work for the Philadelphia Eagles this season is unknown, but it’s going to be fun to watch. The position players have changed dramatically in a year for the Eagles, but several of the new and old faces have fantasy football value.

Can he stay healthy? That’s the biggest question, and has been for several years, surrounding Bradford. He’s a complete wildcard. If he stays healthy, he could put up big numbers in Chip Kelly’s system. However, that’s a massive IF.

Murray finally stayed healthy and put together the best season among RBs in a contract year. The Eagles rewarded him with a wealthy deal. However, don’t expect Murray to come close to the numbers he put up last season. He’s constantly battled injury and the offensive line in Philadelphia isn’t as good as the one in Dallas. Murray also topped 350 carries last year, a figure that doesn’t indicate anything positive for Murray. Regression is all but assured.

With Mathews, Murray and Bradford, the Eagles have the most injury-prone backfield in the NFL. Mathews’ ceiling is high, especially if Murray goes down, but Mathews’ own injury problems make him risky. He’s worth taking as a backup, especially if you select Murray.

He finished just outside the top 30 among RBs last season, but his first two games accounted for over a third of his points. He still has some value in PPR leagues, but he’s nothing more than a limited upside backup in standard leagues.

Maclin is now gone, which means Matthews should be the top target in Philadelphia. He finished 24th among fantasy WRs in his first season last year. He should improve on those numbers this year, especially if he eliminates some of the games he disappeared in last season. However, there is still the risk Agholor has a big year and takes away some of Matthews’ numbers.

The first round pick out of USC will be expected to help replace Jeremy Maclin. He should start right off the bat, and is worth spending a mid-to-late round pick on. There is a chance he could surpass Matthews at some point this season.

Cooper played well at times with Nick Foles, but I don’t expect much with Bradford in town. Agholor will get a chance to replace Cooper, as will Josh Huff.

A sleeper pick for deep leagues, Huff has potential. He’s explosive and will have a chance to get some of Maclin’s, and possibly Cooper's, targets.

Ertz found a way to finish inside the Top 15 among fantasy TEs, despite splitting playing time with Brent Celek. Ertz’ blocking holds him back, but if he can take the majority of Celek’s catches, he’s a top seven fantasy TE.

Keep it locked here for all your Fantasy Football needs and Philadelphia Eagles news.