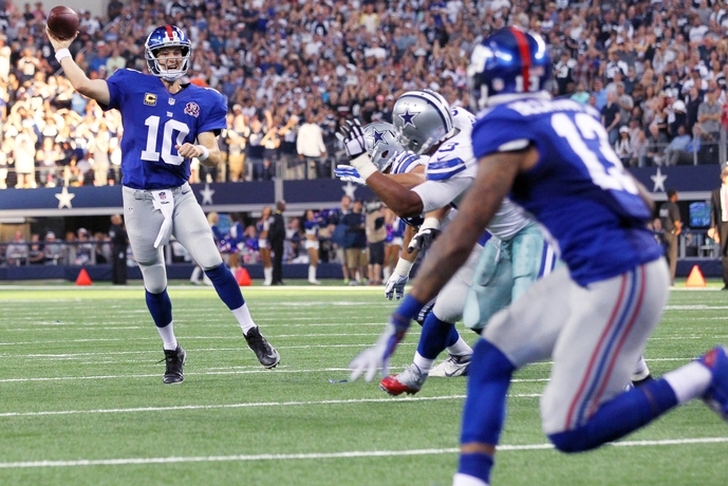 It’s been about four years since the New York Giants won a championship and Tom Coughlin is on the hot seat, which means the New York Giants will probably win the Super Bowl over the New England Patriots again. The Giants haven’t ever been a great fantasy football team, but they do have a several players worth drafting.

Manning finished 10th among fantasy QBs last season and he now gets Odell Beckham for a full season. Expect him to finish around the same place this season.

If he can stay healthy, Jennings could be a high-end RB2. He played well when he was healthy, but missed too many games. He averaged almost 10 points per game last year. He’s undervalued in most drafts.

Tasked with replacing an injured Jennings, Williams struggled early. However, he picked it up late. He’ll likely be stuck behind Jennings this year, but is worth taking as a handcuff.

Vereen finished 27th among fantasy RBs last season, but I think he’ll drop a bit this year. He’s got great PPR value, but I don’t think he’ll get enough carries to be anything more than a bye-week flex play.

Beckham finished fifth among fantasy WRs, despite playing in just 12 games. He averaged 17 points per game, two more than any other wide out. He can't reproduce that same season (right?), but he’s still worth taking as a top 5 wide out.

This time last season, Cruz was a Top 25 fantasy WR. This season, he’s coming off a serious injury and is dealing with the emergence of Odell Beckham. Don’t expect him to return to form right away, but he could pick things up late in the season.

Donnell put together some big games, but relies heavily on TDs for fantasy points. That’s dangerous.

Keep it locked here for all your Fantasy Football needs and New York Giants news.